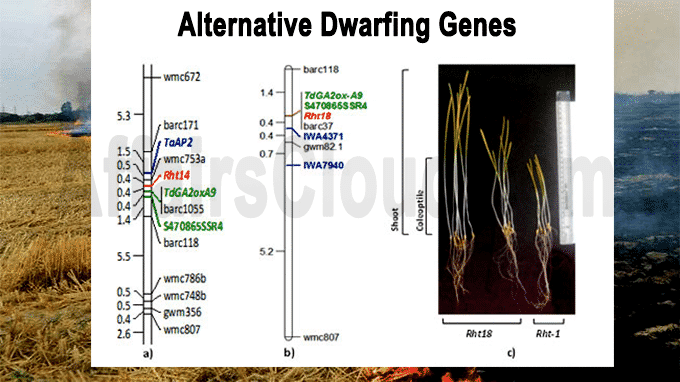 On May 21, 2020, A team of Scientists at the Agharkar Research Institute (ARI) based in Pune (Maharashtra) have mapped two alternative dwarf genes – Rht14 and Rht18– in wheat that can eliminate rice crop residue burning i.e stubble burning  – one of the key sources of air pollution in north India during early winter.

However, deep sowing conditions are not very favorable in dry environments due to small coleoptiles (a sheath protecting a young shoot tip in grass or cereal).

iii.Benefits: In addition to reduction in crop residue burning, wheat varieties with these alternative dwarf genes may also be helpful in deep sowing of wheat seeds to take advantage of residue humidity in the soil under dry environments. It will save valuable water resources and reduce the cost of farming.

iv.Background: Burning the remains of the remaining rice crop is very harmful to the environment, soil and human health. Therefore, there is a need for inclusion of genes that dwarf alleles in wheat improvement programs.
Farmers in India burn about 23 million tonnes of leftover rice annually to get rid of the straw and prepare their fields to sow the next crop, which results in air pollution.

v.The research has been published in The Crop Journal and Molecular Breeding.