The first Sunhak Peace Prize 2015 was awarded to Kiribati President Anote Tong and fisheries scientist Dr. M. Vijay Gupta on August 28, 2015. This award is given to eminent individuals from around the world for their contribution to peace and development of the world. 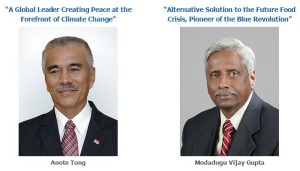