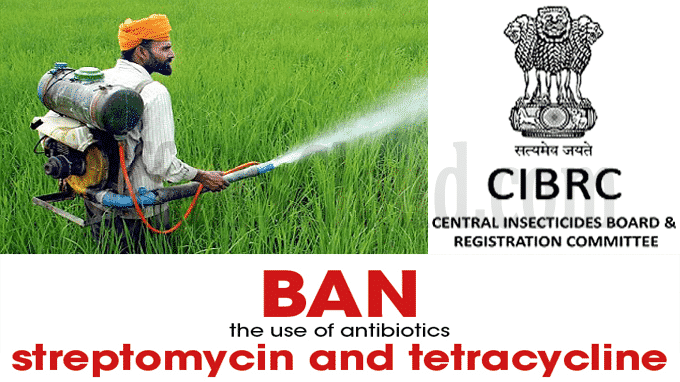 The Registration Committee (RC) under the Central Insecticides Board and Registration Committee(CIBRC) has recommended the use of Tuberculosis(TB) drugs(antibiotics) like streptomycin and tetracycline to be banned completely with immediate effect on crops where other options were available for bacterial disease control.  This recommendation was accepted.

The RC held its 414th meeting on May 1, 2020, under the Chairmanship of S. K. Malhotra, Agriculture Commissioner & Chairman, Registration Committee through video conference, where a report was submitted by the sub-committee on production, sale and use of streptomycin sulphate (9%) and tetracycline hydrochloride (1 %).

Other accepted recommendation of the subcommittee are:

i.Streptomycin and tetracycline use will be phased out by 2022-end for crops for which no alternatives were available. Till then, the antibiotics could be used on crops strictly as per the label claim.

ii.The diseases can also be managed by using Integrated pest management (IPM), and other practices. In the meantime, the Indian Council of Agricultural Research(ICAR) is requested to initiate research to search for better and safer alternatives.

iii.ICAR may plan in this direction to ensure the availability of efficacious alternatives for all the recommended crops in a time-bound manner.

The RC has directed the Secretariat of CIBRC to forward the report to ICAR and Department of Agriculture Cooperation(DAC) for necessary action on suggesting alternatives.

i.During the World Antibiotic Awareness Week in November 2019, Centre for Science and Environment (CSE)  released a detailed assessment which highlights the excessive misuse of important antibiotics in crops. It had suggested measures to contain this malpractice and regulate it.

ii.The assessment was carried out in agricultural farms of Delhi, Punjab and Haryana where CSE has found that streptocycline, a 90:10 combination of streptomycin and tetracycline, was used by farmers in high doses in crops.

iii.CIBRC has allowed the use of streptocycline for 8 crops & was found to be used on many more crops in practice.

iv.CSE had recommended that antibiotics should not be used as pesticides for crops, but preserved for treatment of bacterial infections in humans. It had shared its recommendations with all stakeholders concerned, including the CIBRC.

Streptomycin has important use for previously treated TB patients, who make up over 10% of the total estimated TB incidence in India & also used in multidrug-resistant TB patients and in certain cases of TB meningitis (brain TB).

The Central Insecticides Board & Registration Committee (CIBRC) was set up by the Ministry of Agriculture and Farmers Welfare in the year 1970 to regulate the import, manufacture, sale, transport, distribution and use of insecticides. The insecticides are regulated under Insecticides Act, 1968 and Insecticides Rules, 1971.