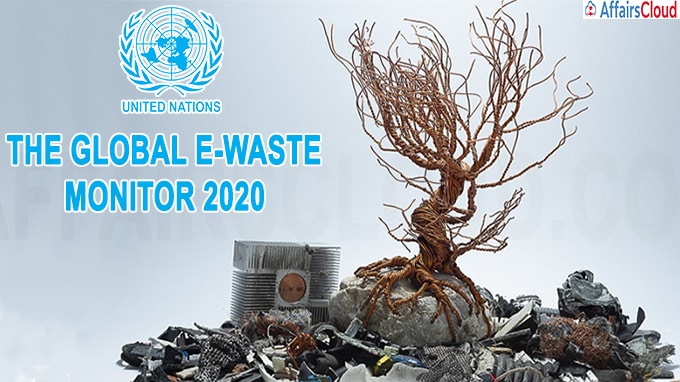 In accordance with “3rd edition of The Global E-waste Monitor 2020 report-Quantities, flows, and the circular economy potential” report, the world dumped a record 53.6 million tonnes of e-waste in 2019, an increase of 21% in 5 years. With this e-waste becomes the world’s fastest-growing domestic waste stream. Notably, this waste is enough to form a line 125 kilometres long.

-The report also predicted that in global e-waste the discarded products with a battery or plug will reach 74 million tonnes by 2030.

-Due to Global warming 98 million tonnes of carbon dioxide (CO2) equivalents were released into the atmosphere due to inadequate recycling of refrigerators and air conditioners.

-In 2018, the highest policy-making body of the ITU, the Plenipotentiary Conference, established a target to increase the global e-waste recycling rate to 30 per cent by 2023.

-ITU Member States also set a target to raise the percentage of countries with an e-waste legislation to 50 per cent – or 97 countries – by 2023.(Till 2019, 78 countries adopted a national e-waste policy, legislation or regulation)

-E-waste is a health and environmental hazard because it contains toxic additives or hazardous substances such as mercury which damages the human brain and / or coordination system.

–India is the only country in South Asia to draft legislation for e-waste.