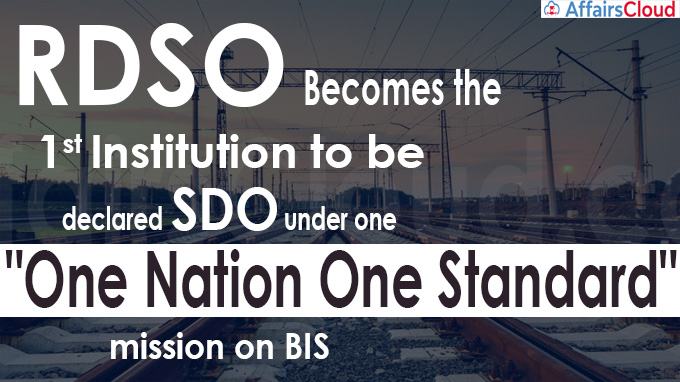 On 24th May 2021, Research Designs & Standards Organization (RDSO) became the 1st Indian Institution to be recognised as a Standard Developing Organization (SDO), under Bureau of Indian Standards (BIS) SDO Recognition Scheme. SDO recognition is a key part of India’s “One Nation One Standard” mission.

i.RDSO is the sole R&D Wing of the Ministry of Railways located in Lucknow (UP), which is now responsible for developing World Class Standards for products manufacturing in the Railways sector.

ii.BIS SDO recognition is approved for one institution per sector, which maintains Global Best Standards as per the World Trade Organisations (WTO)-TBT “Code of Good Practice”

iii.The recognition is valid for 3 years and will require renewal after completion of the validity period.

What is “One Nation One Standard”?

Objective – To design a Uniform National Standard for sector specific products, which will be made mandatory for organisations under the sector.

i.Domain Specific Experts from various organisations in a particular sector will design Standards for products manufactured in India.

ii.“One Nation One Standard” mission is a part of the ‘Make in India’ program, which is designed to make Indian products compatible in the Global market.

About Bureau of Indian Standards (BIS):