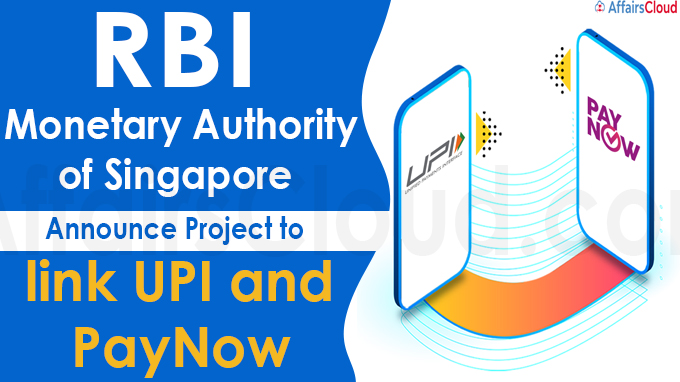 In order to ease cross-border payments between India and Singapore, on September 14, 2021, the Reserve Bank of India (RBI) and the Monetary Authority of Singapore (MAS) are all set for linkage project under which their respective fast payment systems viz. Unified Payments Interface (UPI) and PayNow will be linked by July 2022.

Reasons behind this linkage:

i.This decision is on the lines of the G20’s (Group of Twenty) financial inclusion priorities of driving faster, cheaper and more transparent cross-border payments.

i.The UPI-PayNow linkage will enable their users of UPI to make instant, low-cost fund transfers without the need of another payment system.

Initiated in 2016, it is India’s mobile based, ‘fast payment’ system that facilitates 24*7 payments instantly using a Virtual Payment Address (VPA) created by the customer instead of his/her bank account number.

Launched in 2017 by the Association of Banks in Singapore (ABS), it is also an electronic fund transfer service of Singapore that allows a user to transfer funds instantly to a payee, using his/her mobile number or or VPA number without using bank account number.

i.According to Bloomberg, cross-border flows between India and Singapore add up to over $1 billion annually.

ii.Earlier, NPCI International had tied up with Mashreq Bank to enable UPI acceptance in the Middle East.

iii.Bhutan was the first neighbourhood country to enable UPI acceptance.

The apex bank has imposed a monetary penalty of Rs 1 Lakh on the Kosamba Mercantile Co-operative Bank Ltd. located in Kosamba district of Surat, Gujarat after exercising its power under the provisions of section 47 A (1) (c) read with sections 46 (4) (i) and 56 of the Banking Regulation Act, 1949.

On July 08, 2021, the Reserve Bank of India (RBI) issued an advisory to banks and other RBI-regulated entities to prepare for the transition from the international benchmark reference rate, ‘London Interbank Offered Rate’ (LIBOR), to any other widely accepted Alternate Reference Rates (ARR).