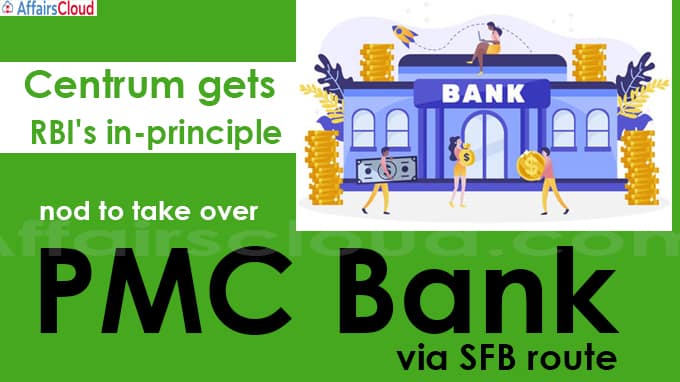 On June 18, 2021, the Reserve Bank of India (RBI) granted  in-principle approval to Centrum Financial Services Limited (CFSL), a subsidiary of Centrum Capital Limited (CCL) to set up a small finance bank (SFB) under general “Guidelines for ‘on tap’ Licensing of Small Finance Banks in the Private Sector” dated December 5, 2019.

About Setting up of SFB by CFSL:

i.For the setting up of SFB, there will be capital infusion of Rs 1,800 crore by CCL, and its partner BharatPe, a trademark of Resilient Innovations Private Limited.

ii.The capital will be infused in two equal installments of Rs 900 crore. First installment will be utilized for business initiation while the second one will be provided next year.

iii.A period of 120 days is provided for its commencement.

iv.Both Centrum and BharatPe will hold 50% share in SFB.

In September 2019, PMC Bank was placed under curbs for financial irregularities due to which on November 3, 2020, its administrator floated an Expression of Interest (EoI). CFSL had applied for the same at that time which resulted in approval for amalgamation of PMC Bank by CFSL through the SFB route.

RBI cancelled the license of Bhagyodaya Friends Urban Co-operative Bank Limited, Maharashtra in April 2021, as the bank doesn’t have adequate capital to fund its depositors in full and as it did not comply with the various provisions of the BR Act, 1949.