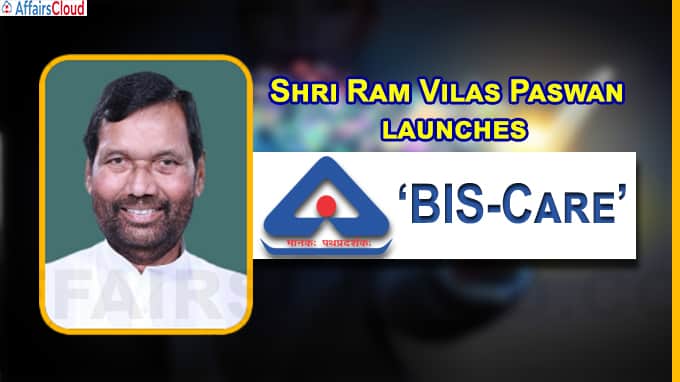 On July 27, 2020 Union Minister for Consumer Affairs, Food & Public Distribution Ram Vilas Paswan launched the Bureau of Indian Standard (BIS)’s Mobile App, ‘BIS-Care’, by which consumers can check the authenticity of the ISI and hallmarked products and also lodge complaints. In addition to this, he also launched 3 portals of e-BIS on Standardisation, Conformity assessment and Training Portals on www.manakonline.in for consumers.

It can be operated on any Android phone. This app is operational in Hindi and English language and can be downloaded from Google play store.

i.One of the important aspects of BIS functioning is certification and surveillance to enforce the implementation of standards.

ii.BIS strengthens its enforcement capacity by implementing e-BIS, as it is an integrated portal that includes all the functions of BIS including the following:

BIS is developing a portal on Consumer Engagement to facilitate the online registration of consumer groups, submission of proposals, approvals and complaint management.

A scheme for the recognition of other Standard Development Organizations

BIS has formulated a scheme for the recognition of other Standard Development Organizations in the country with the objective of harmonization of standard formulation. The scheme is under examination and will be launched soon.

The Department of Consumer Affairs has approved the Standard National Action Plan and also identified the important sectors of the economy for development of standards.

i.BIS has collaborated with various Ministries and Departments to help them issue Quality Control Orders(QCOs) for 368 products and work on the formulating QCOs for 239 products is in progress.

ii.BIS had developed COVID standards for cover-all and ventilators and issued norms to grant licenses for N95 Masks, surgical masks, and eye protectors. This has resulted in an increase in the production of ISI-marked PPE items.

iii.Testing facilities for drinking water and assaying of gold jewellery are being created at 8 BIS labs and also in several branch offices, like Hyderabad, Ahmedabad among others.

BIS imparts training through the National Institute of Standardization

i.BIS through the National Institute of Standardization at Noida has been imparting training to various stakeholders, as training plays an important role in the promotion and implementation of standards.

ii.It has now formulated a comprehensive Training Policy and an action plan to reach out to industry, consumer organizations, and Govt. officials through online and offline courses.