Each day of the week will focus on a particular theme: 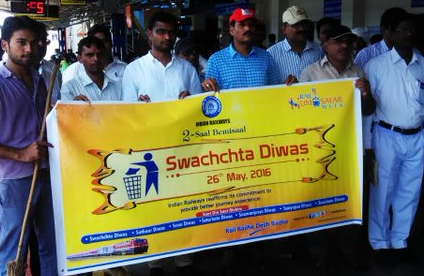 Purpose: To highlight the Initiatives and Significant achievements by Indian Railways in the areas of responsiveness, accessibility and improvement of passenger amenities.

1. 26th May, (Swachchta Diwas) – Intensive Cleanliness Drive on all the Stations and in Trains with the help of railway staff, NGOs, staff associations, scouts & guides
2. 27th May (Satkaar Diwas) – Exhaustive inspection of all catering establishments and Drinking water facilities at stations and in trains
3. 28th May (Sewa Diwas) – Monitoring the train and sub urban trains between 1000 to 1600 hours.
4. 29th May Punctuality (Satarkata Diwas) and Ticket Checking drive would be undertaken across the Zonal Railways
5. 30th May (Saamanjasya Diwas) a day long exercise would be undertaken on all Divisions and Zonal Railway HQs
6. 31st May (Sanyojan Diwas) – DRMs and GMs would hold meetings and seminars with all Major Freight Traffic Customers to advise them about the various reforms and policy initiatives on the freight traffic
7. 1st June (Sanchaar Diwas) – DRMs and GMs would review various activities under taken during the week and may hold Press Conferences

About Indian Railway:
♦ Indian state-owned enterprise, owned and operated by the Government of India through the Ministry of Railways.
♦ Headquarters: New Delhi
♦ Founded: April 16, 1853