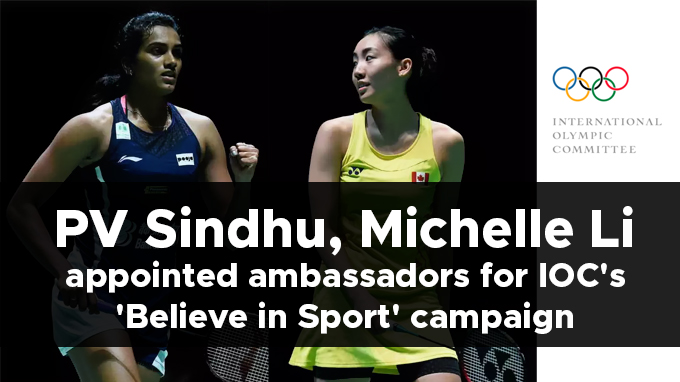 Badminton World Federation(BWF) World Champion and Olympic medal winner Pusarla Venkata Sindhu(PV Sindhu) and Michelle Li, a Canadian badminton player have been named the athlete ambassador for International Olympic Committee(IOC)’s “Believe in Sports” Campaign.  Both the badminton players(shuttlers) will work towards creating awareness about competition manipulation among the athletes.

Both PV Sindhu and Michelle Li have been the global ambassador of the “I Am Badminton” Campaign of BWF since April 2020.

The Believe in Sports Campaign was launched by the IOC in 2018 to raise awareness about the threat of competition manipulation among the athletes, coaches and officials.

i.PV Sindhu is a 25-year-old shuttler from Hyderabad, Telangana who is currently ranked world no. 7 in the Women’s Singles Category(As of 4th May 2021).

ii.She won the silver medal at the 2016 Rio Olympics.

Michelle Li born in Hong Kong is a Canadian badminton player who is currently ranked world no 11 in the Women’s Singles Category(As of 4th May 2021).