Prime Minister Shri Narendra Modi visited the Republic of Maldives on June 8-9, 2019 at the invitation of Mr. Ibrahim Mohamed Solih, President of the Republic of Maldives to strengthen the bilateral ties, reflecting the importance India attached to its ‘Neighbourhood First’ policy. This was the first overseas visit of the Prime Minister after his re-election. PM was received at Male airport by Foreign Minister Abdulla Shahid. 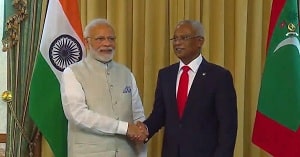 6 Memorandum of Understandings (MoUs) were signed between Maldives and India.

Prime Minister Modi visited Sri Lanka on June 9, 2019, at the invitation of Mr. Maithripala Sirisena, President of the Democratic Socialist Republic of Sri Lanka. On the second leg of PM’s first foreign visit to Sri Lanka, he was received by the Lankan counterpart Ranil Wickremesinghe at the Bandaranaike International Airport.

PM Modi met Sri Lankan President Sirisena and they discussed bilateral issues of mutual interest. The two sides agreed that terrorism is a “joint threat” that needs collective and focussed action. A banquet was hosted in honour of PM by Sri Lankan President. Modi became the first foreign leader to visit Sri Lanka after the Easter attacks in April. 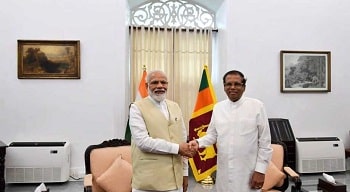 PM Modi stressed on close economic and strategic cooperation between India and Sri Lanka. They held discussions on issues like unity in efforts for eradicating terrorism, maritime security in the Indian Ocean Region and cooperation in economic development.

Discussion on the expansion of economic relations

Other Facts:
i.PM Modi planted a sapling of an evergreen Ashoka tree at the Sri Lankan President Maithripala Sirisena’s residence.
ii. Sri Lanka President Sirisena gifted a Buddha statue in meditation posture to PM Modi.  It is one of the best sculptures in the Anuradhapura era. The original statue was sculptured between the 4th and 7th centuries A.D.
iii.PM Modi visited St. Anthony’s Shrine, Kochchikade and paid tribute to the victims of Easter terror attack.
iv.PM interacted with members of the Indian Community at India House in Colombo and highlighted the role played by the community in strengthening bilateral relations.
v.PM also met the Leader of Opposition and former President, Mr. Mahinda Rajapaksa and held talks with him.