On April 18, 2018 Prime Minister Narendra Modi arrived in London, United Kingdom (UK) for a four-day official visit, during which, he held bilateral meeting with UK Prime Minister Theresa May and attended Commonwealth Heads of Government Meeting (CHOGM) in London on April 19, 2018. 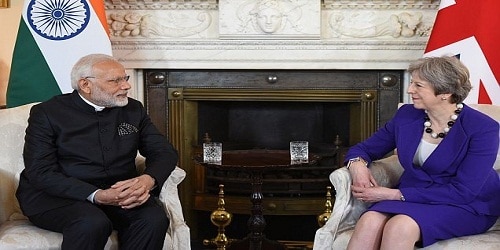 India and UK signed following Memorandum of Understanding (MoUs)/Agreements during the course of Prime Minister Narendra Modi’s visit to UK:

i. UK-India Cyber Relationship framework aimed at having a free, open, peaceful and secure cyberspace; and cooperation in exchange of information and strategies for effective cyber security incident management and threat response.

iv. Agreement between Atomic Energy Regulatory Board of India (AERB) and the Office for Nuclear Regulation of Great Britain (ONR) related to regulation of safe nuclear energy use for peaceful purposes.

v. Statement of Intent between NITI Aayog and UK’s Department of Business, Energy and Industrial Strategy (BEIS) to explore the scope of technology co-operation in areas such as electric vehicles, AI (Artificial Intelligence), FinTech, and advanced manufacturing.

vi. MoU on cooperation in the field of animal husbandry, dairying and fisheries sectors.

vii. MoU on exchange of information for the purposes of combating international criminality and tackling serious organised crime.

viii. An addendum covering research in humanities and social sciences has been added to the 2004 Newton-Bhabha MoU.

ix. MoU between All India Institute of Ayurveda (AIIA) and College of Medicine, UK to enable development of evidence-based guidelines for integrating Ayurvedic principles and practices with modern medicine, and develop Ayurvedic medical education guidelines for Ayurveda education in the UK.

x. MoU to strengthen institutional cooperation in the field of sustainable urban development, to include business engagement, access to finance, knowledge exchange and research and innovation and to build on existing cooperation on the Smart Cities Mission.

Indian IT body National Association of Software and Services Companies (NASSCOM) has partnered with techUK to launch the UK-India Tech Alliance aimed at strengthening the technology sectors in both the countries.

Through UK-India Joint Statement issued during the visit of Prime Minister Modi to UK, both the countries have agreed to reinforce the Strategic Partnership, based on shared values, common law and institutions.

India is among four countries to pool into the USD 5 million ‘Commonwealth Small States Trade Finance Facility’ which will enable small states to obtain easier access to international trade finance to diversify their economies and achieve the sustainable development goals.

On April 18, 2018, Prime Minister Narendra Modi had a series of bilateral meetings including discussions with his Bangladesh counterpart Sheikh Hasina and Seychelles President Danny Faure on the sidelines of the multilateral Commonwealth Heads of Government Meeting (CHOGM) in London, UK.