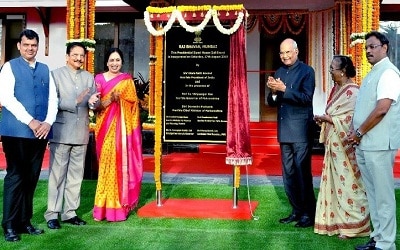 Key points
i. It is a bunker of the British era in the 19th century and was discovered in 2016. It was used to fire cannons at enemy ships and the other section depicts the history of Raj Bhavan.
ii. It has 13 rooms comprising of shell store, Gun shell, Cartridge store and Central Artillery store. The museum is expected to be opened to the public by the end of 2019 with online booking facility.
iii. The museum has virtual reality booths where visitors can virtually time travel to the 19th century.
Jal Bhushan: The president also unveiled the foundation stone for the reconstruction of Jal Bhushan. It is the Governor’s office-cum-residential building with a history of nearly 200years. The present building has undergone renovation.
It was the residence of British governors in 1885 and was shifted to Malabar Point from Parel,Mumbai.
Members present:
The members present during the function were