The Indian President  Mr. Ram Nath Kovind  visited Greece on June 18-19, 2018.
He is the first Indian president to travel to Greece in 11 years 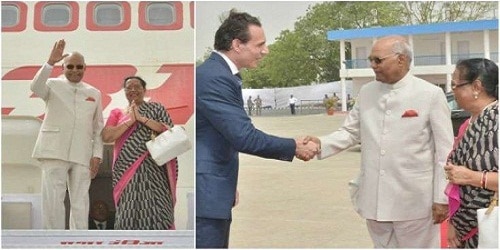 On June 19,2018, The President gave a speech at Hellenic Foundation for Europe and Foreign Policy in Athens.

On June 19,2018, The president highlighted investment opportunities in India that would work towards a USD 5 trillion economy by 2025.

About Trade between Greece and India:

India-Greece bilateral trade stands at USD 530 million and some Indian companies are also present in the infrastructure, pharmaceutical and steel sectors in the central European nation.

India and Greece will strengthen the bilateral economic relationship by focusing on sectors like shipping, tourism and agriculture

On June 19, 2018, India and Greece decided on strengthening bilateral relations on  sectors like shipping, tourism and agriculture.

It is the among India’s largest trading partners.

On June 19,2018, addressing Hellenic Foundation for European and Foreign Policy (ELIAMEP) – a leading foreign policy think tank in Greece and in Europe in the Business forum President heighted the following points:

On June 19,2018 He was received at the Paramaribo airport by Suriname President Desire Delano Bouterse.

On June 21,2018, The president announced extend a Line of Credit of USD 31 million and a concessional financing of USD 20 million to Suriname.

Other commitments in Suriname:

On June 22,2018 The President of India Mr.Ram Nath Kovind arrived in Cuba .

After his visit to Greece and Suriname, He reached capital Havana after first arriving in Cuban city of Santiago.

On June 23,2018, The president held talks with his Cuban counterpart Miguel Diaz-Canel to strengthen bilateral ties.

On June 23,2018, The President of India, Shri Ram Nath Kovind, delivered a lecture at Havana University in Cuba .