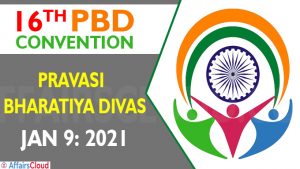 Pravasi Bharatiya Divas (PBD) 2021 was celebrated on January 9, 2021. The Day is celebrated once in every two years to strengthen the participation of the overseas Indian community with the government of India and reconnect them with their roots.

During this day, Prime Minister Narendra Modi inaugurated PBD Convention 2021 virtually in New Delhi, a flagship event of the Ministry of External Affairs.

President Santokhi of Suriname was the chief guest of the PBD Convention 2021.

Theme of the 16th PBD Convention 2021– “Contributing to Aatmanirbhar Bharat”.

On this day, Mahatma Gandhi had returned to India from South Africa in 1915

i.The first PBD was organised during the government of Atal Bihari Vajpayee in 2003.

ii.The PBD were organised every year since 2003 and in 2015 the format was received to celebrate the day once in every two years.

On 8th January 2021, The youth PBD was celebrated as a virtual event under the theme “Bringing together Young Achievers from India and Indian Diaspora”.

i.The event was hosted by the Ministry of Youth Affairs and Sports.

ii.H.E. Ms. Priyanca Radhakrishnan, Minister for Community & Voluntary Sector of New Zealand participated in the event as a special guest.

ii.The coffee table book has over hundreds of photographs of Prime Minister Narendra Modi from his “107 overseas and bilateral visits”.

i.During his address in 16th PBD Convention 2021, Mr. Chandrikapersad Santokhi, president of Suriname proposed a visa-free movement of people between India and Suriname.

i.In the  valedictory session of the PBD celebrations, the Pravasi Bharatiya Samman Award (PBSA) 2021 was conferred by President of India, Ram Nath Kovind.

ii.PBSA is the highest honour conferred as part of PBD convention to Non-Resident Indians(NRIs), Persons of Indian Origin(PIO) or an organization/institution established and run by the NRIs orPIO in recognition of their outstanding achievements both in India and abroad.

iii.PBSA is given to overseas Indians in different fields namely Promoting Indian Culture, Medicine, Community Service, Business among others.

ii.Mukesh Aghi(USA/ Singapore), president and CEO of US-India Strategic Partnership Forum who won the award in the field, Business was also among the awardees.

iii.The 4 organisations who won the award include, NGO Cultural Diversity for Peaceful Future in Armenia in the field, ‘Promoting Indian Culture’, Sai Prema Foundation in Fiji, Indian Cultural Association (ICA) in Nigeria, Federation of Indian Associations of New York, New Jersey and Connecticut(USA) were awarded in the field, Community Service.

ii.All the 15 winners will be invited for an India Tour (Bharat Ko Janiye Darshan) after COVID-19.

i.It was launched  in 2015-16 to reinforce the engagement with young overseas Indians and encourage them to learn more about their country of origin.

ii.The first edition of the online ‘Bharat ko Janiye’ Quiz was organized for young overseas Indians and foreigners of 18-35 years of age in 2015-16. The second edition was in 2018-19.

About Ministry of External Affairs: