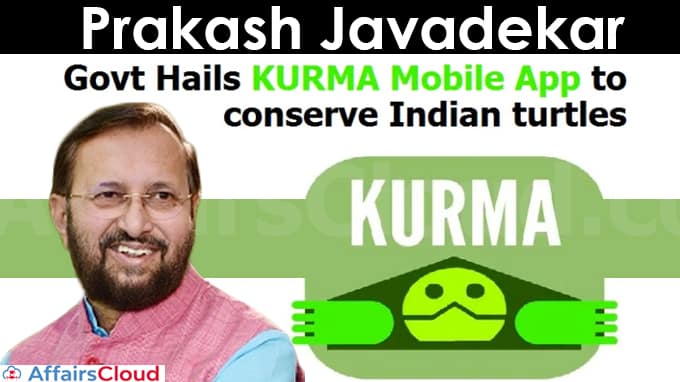 On 19th July 2020, Prakash Javadekar, Union Minister of Environment, Forest and Climate Change and Information & Broadcasting hailed KURMA, a mobile based application contributing towards conservation of Indian turtles, as a unique tool for tracking and reporting Indian turtles and tortoises.

He also appreciated the initiative of Indian Turtle Conservation Action Network (ITCAN) which enhances the contribution of the citizens in the conservation of fauna and flora of the country.

i.The mobile based application KURMA was launched on 23rd May 2020, on World Turtles Day.

iii.Turtle Survival Alliance celebrates the year 2020 as Year of Turtle.

iv.The application is supported on both iOS and Android platforms.

i.The application has an inbuilt digital field guide with 29 species of Indian turtles and tortoises and a digital database with information on Indian turtle’s identification, distribution, vernacular names and threats.

ii.The database of the app provides the data about the location of the nearest rescue site for turtles across the nation.

iii.Around 90 assistance facilities are registered with the app.

The app provides advice about the species and its conservation to the person reporting the turtle though KURMA.

Challenges and Threats for turtles in India:

i.The 2019 report of TRAFFIC, the Wildlife Trade Monitoring Network states that around 200 tortoises and turtles are poached and smuggled every week that is around 11000 every year.

iii.The wildlife crime prevention agencies do not have the sufficient equipment to distinguish the species and how to identify the protection status of the species in accordance with the Convention on International Trade in Endangered Species(CITES) and the Wildlife Protection Act.

An online competition from July1 to 7 was conducted to encourage the people to report turtles from their localities.

About Ministry of Information and Broadcasting:
Union Minister– Prakash Javadekar