PMSBY – Pradhan Mantri Suraksha Bima Yojana is one of the three schemes of social security that were introduced in BUDGET 2015. The other to were

PMSBY is a government – backed accident insurance scheme that was introduced by the Finance Minister Arun Jaitley in BUDGET 2015. It was formally launched on 9th May 2015 by the Prime Minister Narendra Modi in Kolkata.

The risk coverage for accidental death and permanent disability is Rs 2 lakhs. Under the scheme, Rs 1 lakh will be provided for permanent partial disability.

The two main best benefits of the scheme are 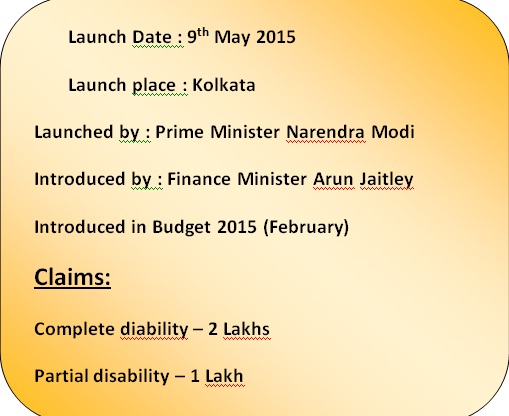 Inclusions and Exclusions of PMSBY

Indian citizens of age group 18 – 70 are alone eligible to enjoy the benefits of the scheme. When the benefiter has multiple bank accounts he / she can join the scheme through only one bank.

NRIs – The Non – Resident Indians are also eligible to take pleasure in the benefits of the schemes. However, when the claim arises, the benefits will be paid to the beneficiary or the nominee only in Indian currency.

The maximum premium payable by a member is Rs 12 per annum. This amount is deducted from the beneficiary’s bank account through an “AUTO DEBIT” facility. The debit happens automatically from the account on June 1 every year.

When one gets enrolled in more than one bank, the claim will be paid only by one bank and the other premiums will get forfeited.

The scheme is administered completely by the PSGIC – Public Sector General Insurance Companies. PSGICs have collaborated with the participating banks that volunteered to help the schemes success to implement the scheme fruitfully.

The banks are given full freedom to engage with any insurance company to implement the scheme. PMSBY has also been digitalised. One can enrol themselves online

To enrol in the scheme, one can visit http://www.jansuraksha.gov.in/Forms-PMSBY.aspx , download the form, fill it and submit it to their bank where they hold an account.

Activation can be done through net banking also.

SMS based process has been introduced by the government to make the process easy.

An SMS will be sent to all the eligible customers of India including NRIs to the mobile numbers that are registered with the Aadhar card. The customers simply have to reply ‘Y’ to the same number. After this, an acknowledgement will be sent to the willing customers.

Now, this citizen is eligible for PMSBY. His details of nominee name, address, date of birth, etc will be taken from the bank account linked with the Aadhar number.

In case, if any one of the details given above is not updated with the Government of India, the customer has to apply in person at any branch nearer to him.

Initially the enrolment period was from June 1 2015 to May 31 2016. Now it has been extended without a stipulated time limit.

Though the scheme is registered at any time by the user, the consent is given only on June 1 and the time period of one year is taken only from June 1 to May 31 of the next year.

The customers who wish to continue the bond beyond the year, has to give an auto – debit option to the concerned bank.

Closure of the premium

The premium comes to an end when

Other important facts of PMSBY

The claim is recompensed only when correct documentary evidence is produced.

The PMSBY demands an FIR in the following cases

It demands hospital records for the following cases

Quiz on PMSBY – Test yourself