The Finance Minister Mr Arun Jailtley introduced Pradhan Mantri Fasal Bima Yojana. He introduced the scheme in the Union Budget 2016 – 17. Subsequently he allocated a budget of Rs 1, 240 crores. Later the amount was raised to Rs 5, 500 crores.

In the second place, You can download the guidelines in PDF format here. 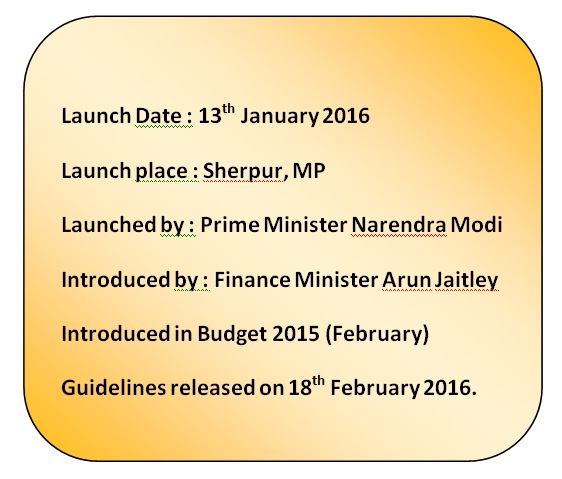 The crops covered under the scheme are Rabi, Kharif and other commercial and horticultural crops. In brief, the following crops are eligible

Inclusions and Exclusions of PMFBY

Suppose the farmer intends to sow or plant his insured crop. Later due to adverse weather conditions he is unable to do so. He shall now be eligible for an indemnity of 25% of his losses.

Following the harvest, the insurance coverage is available for 14 days. Provided the plants are cut and spread. More over, the insurance can be claimed only under the included circumstances.

On the contrary, PMFBY is not applicable to the following circumstances

“Area Approach Basis” is the key factor of PMFBY. An affected farmer can claim his insurance based on the conditions of his environmental area. In other words, the above said inclusion factors are considered.

The Unit of Insurance is Village or Village Panchayat for major crops. On the other hand, the unit is at a higher level for minor crops.

For a notified crop in the notified area, the scheme immediately comes into action. The government makes it compulsory for the following categories of farmers

In short a notified crop in a notified area gets a complete coverage.

The area or a crop that comes under Environment Protection Act 1986 is called a notified area. In such areas underground water is not permissible for any purpose other than domestic uses. Beside NAIS the other schemes are

According to the Budget 2017 report presented by the Finance Minister, the PMFBY is to get an upraisal. In other words, the coverage of the scheme will be increased to 40%. Earlier, it was 30%. Furthermore it will be raised to 50% in the future according to Mr Jailtley.

The most benefitting factor of the scheme is its low premium. As said before 1.5%, 2% and 5% are the premium rates.

However, this will increase the financial burden on the government. The scenario specifically arises as the government indends to contribute five times the premium paid by the farmer.

The rate of subsidy in crop premiums is not out of line when compared internationally. For example, the United States insures its farmers with a subsidy of 70%. In the same way China insures for 80%. On the other hand India has just insured 50%. Hence,

Quiz on PMFBY – Test yourself