On the eve of Teachers’ day, Prime Minister Narendra Modi released two commemorative coins of Rs 125 and Rs 10 in the memory of former President Sarvepalli Radhakrishnan.

On the eve of Teachers’ day, Prime Minister Modi released the coins at a function ahead of his interaction with central school students at Zorawar hall, Manekshaw Centre in New Delhi. 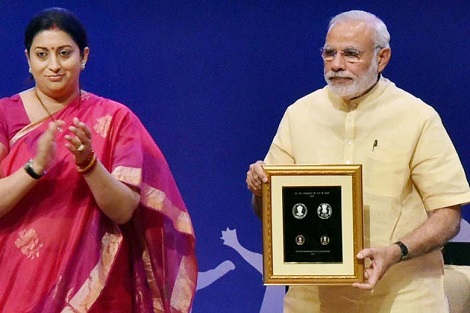 He was born on September 5, 1888, in a middle class family in the pilgrim town of Thiruthani, Tamil Nadu. His father did not want his son to learn English and become a priest instead. But due to his outstanding talent, his father sent him to school at Thirupati and then at Vellore.

Life as a philosopher

He went on to study philosophy at Christian College, Madras and by his confidence, concentration and strong convictions went on to become a great philosopher.

His first book, “The Ethics of the Vedanta and Its Material Presupposition” was actually the thesis he wrote for the M.A. degree examination and established his fame as a great philosopher.

He interpreted Indian thought in western terms and showed that it was imbued with logic and reason, thus giving the Indians a new sense of esteem.

He believed that in India, a philosopher’s duty was to keep in touch with the past while stretch out to the future. He moved beyond mere academic theory and sought to engage his philosophical and religious studies in the political and social developments of the contemporary context. He firmly resisted the deforming pressures of colonialism and was committed to the society.

He was a very humane person and was very popular among his students when he was a professor in Presidency College. He was offered the professorship in Calcutta University when he was less than 30 years old.

He served as Vice-Chancellor of Andhra University from 1931 to 1936. In 1939, he was appointed the Vice Chancellor of Banaras Hindu University .Two years later, he took over the Sir Sayaji Rao Chair of Indian Culture and Civilisation in Banaras.

He was invited to fill the Chair of Spalding Professor of Eastern Religions and Ethics at Oxford .

He was chosen as the Vice President in 1952 and then as the President in 1962. It was during his term that the Chinese invasion and ’65 Pakistan War took place. The nation’s morale was shaken but with a firm and resolute voice broadcast over the radio, he strived to raise the moral of the country.

The Bharat Ratna, the highest award of the nation, was conferred on him in 1954 in recognition of his meritorious service to mankind.