Indian Prime Minister Narendra Modi undertook a four-nation tour of Germany, Spain, Russia and France from May 29, 2017 with an aim to strengthen relations with these countries and highlight India as a potential investment destination.

Three MoUs between India and Germany:

Nine Joint Declaration of Intent (JDI) between India and Germany:

As a part of his four-nation tour, PM Modi reached Spain on May 31, 2017. He thereby became 1st Indian PM to visit Spain in nearly 30 years after former Prime Minister Rajiv Gandhi visited Spain in year 1988.

Background Information: Russia had been pushing India to sign the agreement on Kudankulam nuclear reactors for the past eight months. The agreement had missed two deadlines earlier. Russian officials consider the conclusion of the agreement as the biggest accomplishment during the summit.

In a bid to boost bilateral trade and economic ties, India and Russia have agreed to set up joint ventures for manufacturing aircraft and automobiles.

On June 1, 2017, Indian Prime Minister Narendra Modi and Russian President Vladimir Putin  signed the St Petersburg Declaration to mark 70 years of India-Russia diplomatic ties. The declaration envisages an action plan for deepening relations in all areas, including political and economic development of the two countries

List of MoUs/Agreements signed on the sidelines of the 18th India-Russia Annual Summit (June 02, 2017)

Seven MoUs/Agreements were signed on the sidelines of the 18th India-Russia Annual Summit on June 2, 2017 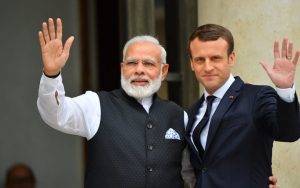 On June 3, 2017, Indian Prime Minister Narendra Modi met newly-elected French President Emmanuel Macron in Paris, France. After two-hour long talks between the two Prime Ministers, India and France vowed to work together for the successful implementation of the landmark Paris climate agreement and fight the challenge posed by terrorism.