On september 11, 2019 the Prime Minister of India Shri Narendra Modi launched nationwide campaign “Swachhta Hi Seva 2019”(SHS) in Mathura, Uttar Pradesh(UP). The theme for 2019 is ‘plastic waste awareness and management’. This SHS which means “Cleanliness is service” is observed from 11th September to October 2nd 2019 as part of the Swachh Bharat Mission (SBM) that also aims to make the nation Open Defecation Free(ODF) on the 150th birth anniversary of Mahatma Gandhi on September 2, 2019. 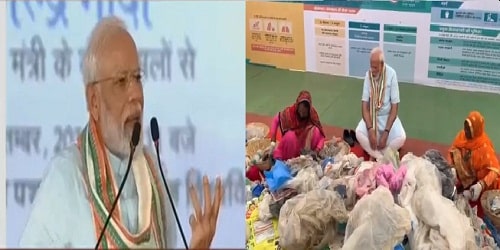 Swachhta Hi Seva 2019
It is a nationwide mass campaign aimed to collect the plastic waste in the country by 150th birth anniversary of Mahatma Gandhi(October 2,2019) and to dispose the plastic waste before 2019 Diwali (27th October).
i. The launch of SHS campaign 2019 in UP, is jointly organised by Departments of Animal Husbandry and Dairying (AH&D), Ministry of Drinking Water and Sanitation(MDWS) and the Government of UP.
ii. PM also visited the Pashudhan Arogya Vigyan Mela, where the cows were operated to remove plastics from their stomach.
iii. Members present: Union Minister of Fisheries, Animal Husbandry and Dairying, Shri Giriraj Singh, Minister of State(MoS) of Jal Shakti, Shri Rattan Lal Kataria and other officials were present.
iv. Department engagement under SHS 2019: The Department for Promotion of Industry & Internal Trade (DPIIT), ensured recycling of plastic waste with Cement Kilns, the Railway ministry has installed plastic crushers in various railway stations, the Jal ministry indulges in plastic waste segregation with Women’s Group etc.
v. Portal:  A special portal and web page on MyGov.in is available where people can upload pre and post intervention photos of their shramdaan(Voluntary work) and other interventions.
vi. WHO estimates: The World Health Organisation(WHO) as of 2017, estimated that through this sanitation drive, nearly 3 lakh lives would be saved and also the cases of diarrhoea would fall by 30% in the country.

About SHS:
The First SHS was launched on September 15, 2017 by the President of India Shri Ram Nath Kovind in Kanpur, Uttar Pradesh.
i. Coordinator: The campaign is coordinated by the Union Ministry of Drinking Water and Sanitation(DDWS), which is concerned ministry managing the Swachh Bharat Mission
ii. Objective: To urge people to reinforce them in Jan Andolan (mass movement) in the sanitation drive to contribute for Gandhi’s dream of clean India.

About SBM:
The swachh Bharat mission also called as Swachh Bharat Abhiyan(SBA) is a nationwide campaign from 2014-19 with the objectives of clean environment across the country and also 100% ODF by october 2, 2019.