On his 67th birthday on September 17,2017, Prime Minister Narendra Modi dedicated the Sardar Sarovar dam built on the Narmada river to the nation at Kevadia in the Narmada district, Gujarat. The project was accomplished by Gujarat government’s Sardar Sarovar Narmada Nigam Ltd (SSNL). 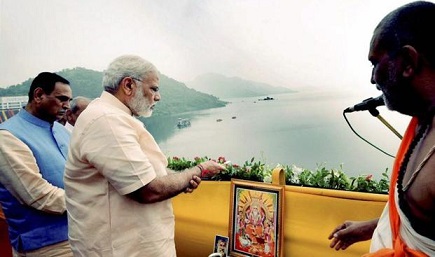 The Sardar Sarovar Dam project was conceptualised by Sardar Vallabhbhai Patel in 1946 and, hence, has been named after him. The project that was unveiled today took 56 years to achieve its final form. The foundation stone for the dam was laid on April 5, 1961 by the country’s first prime minister Jawaharlal Nehru.

Obstacles for the project and measures taken:-

i. A dispute was raised for the sharing of water from Narmada river between Gujarat and Maharashtra., In 1964, to resolve the dispute the Government of India appointed an expert committee under the chairmanship of Dr A N Khosla.

ii. Medha Patkar-led Narmada Bachao Andolan took the government to the Supreme Court over environmental and rehabilitation issues, and obtained a stay in 1996. The court allowed resumption of work in October 2000.

Significance of the project :-

i. This project is called as “Gujarat s lifeline”.

ii. This project is a boon to the country’s worst dry areas like Saurashtra, Kutch and North Gujarat and even few districts of Rajasthan.

iv. The height of the dam was recently raised to 138.68 metres, which will allow maximum ‘usable storage’ of 4.73 million acre feet of water and will greatly benefit the participating States.