On September 13,2017, Prime minister of japan Shinzo Abe came to India on a two day visit to attend the 12th Indo-Japan annual submit meeting held at Ahmedabad. Various agreements and MoU’s were signed that would strengthen India-japan bilateral ties

Immediately after the welcome ceremony, Abe, his wife, and PM Modi set-off on an 8-km roadshow in an open-roof jeep for the famous  Sabarmati Ashram, where Mahatma Gandhi spent a considerable time of his life. 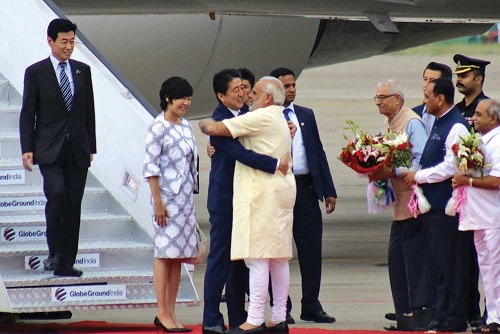 Modi gifted a marble statuette of Mahatma Gandhi’s “Three Wise Monkeys” to his Japanese counterpart Shinzo Abe . The monkeys are a symbol of the proverb ‘see no evil, hear no evil, speak no evil’, believed to have its origin in Japan. 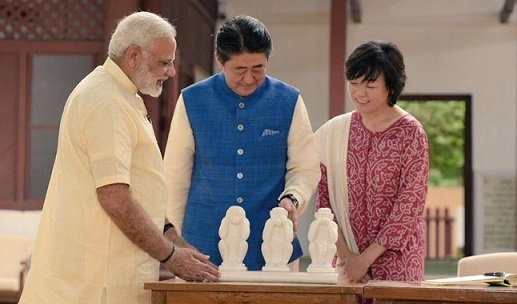 Highlights of the visit:-

On September 14,2017 Prime Minister Modi and Japanese Prime Minister Shinzo Abe jointly laid the foundation stone for India’s first high speed bullet train  project between Mumbai and Ahmedabad.
Significance of this project :-
i. Provides high speed connectivity
ii. The Mumbai-Ahmedabad corridor, would become a single economic zone and would become the area of rapid growth.
iii. Technology transfer envisaged in this project will benefit Indian Railways, and boost the “Make in India” initiative.
iv. The project would be eco-friendly as well as human-friendly. During this 12th Indo -japan submit 15 key agreements and MoU’s were signed between India and Japan. Two countries vowed to increase mutual cooperation in the areas of manufacturing, civil aviation, science & technology, connectivity and skill development.
Agreements and MoU’s
i. In the field of disaster risk reduction and disaster prevention.
ii. Japanese language education in India as a part of skill training .
iii. To enhance connectivity and promote developmental projects in the North Eastern Region of India
iv. “Cool EMS” service between the Japan Post and India Post through which fresh food can be sent from Japan to India in cool boxes to facilitate for the Japanese emigrants in India.
v. To identify and foster talented young scientists from both the countries to collaborate in the field of theoretical biology
vi. To facilitate and deepen international education cooperation and exchanges between sports authorities of India and japan. This move will enhance our medal prospects in next Olympics.
vii. To promote institutional cooperation between RIS and IDE-JETRO to strengthen the capacity of research and effectiveness of dissemination of research findings.

On 15th September India  signed a loan deal worth $76 million with Japan International Cooperation Agency (JICA) for a project to upgrade the environment management plan at Alang-Sosiya ship recycling yards in Gujarat.

The total cost of the project will be $111 million, out of which $76 million will be provided as soft loan from JICA. Out of the remaining amount, $25 million as taxes and fees will be borne by the Gujarat government and the balance $10 million will be shared by the Shipping Ministry and the state government

The project will be executed by Gujarat Maritime Board (GMB) and is likely to be completed by 2022.

On September 14,2017 India and Japan signed Open sky agreement that will allow their airlines to operate unlimited number of flights between the two countries without any restrictions.

This agreement was signed during japan PM’s Shinzo Abe’s visit to India, Earlier India and Japan exchanged RoD (Record of Discussions) on civil aviation cooperation with respect to open sky.

Background of the pact :-
The open sky agreement was signed as a part of (NACP)National Civil Aviation Policy, 2016. The NACP allows government to enter into ‘open sky’ air services agreement on reciprocal basis with SAARC nations as well as countries with territory located entirely beyond a 5,000 kilometre radius from New Delhi.
So far, India signed open sky agreement

Significance of the pact:-

On September 14,2017 ,India and Japan have signed a memorandum of understanding (MoU) to set up India Japan Act East Forum. It is one of the 15 agreements signed during Shinzo Abe’s visit to India .
Significance of the Forum :-
i. The forum will enhance connectivity and promote developmental projects in India’s Northeast region in an efficient and effective manner.
ii. The purpose of forum is to converge India’s Act East Policy with Japan’s Free and Open Asia-Pacific strategy in the backdrop of China’s One Belt One Road initiative.
iii. It can complement India’s connectivity initiatives in Bangladesh, Myanmar and beyond, besides BBIN (Bangladesh, Bhutan, India, Nepal) and BIMSTEC (Bay of Bengal Initiative for Multi-Sectoral Technical and Economic Cooperation) Motor Vehicle Agreements.

Japan will extend a loan of Rs 2,239 crore to India for ‘North East Road Network Connectivity Improvement Project’ to improve the National Highway 40 (NH-40) and construct a bypass on NH-54 in the Northeast. The project is expected to contribute to the improvement of the intra-regional and international connectivity through regional economic development.

North east is a of strategic importance to India. Accepting this loan is also a part of India’s Act East Policy. Japan has also placed a special emphasis on cooperation in the Northeast for its geographical importance of connecting India to Southeast Asia