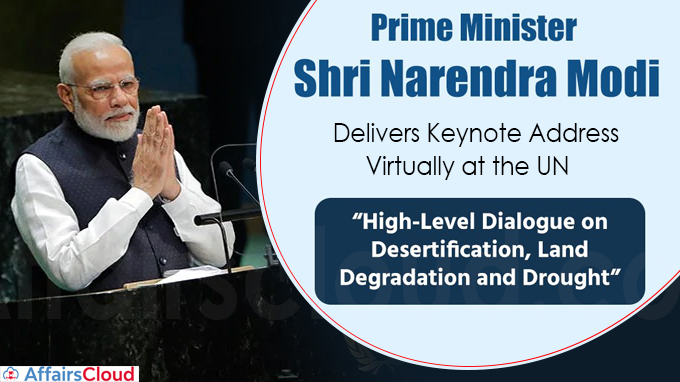 Prime Minister Narendra Modi virtually delivered his keynote and highlighted India’s commitment to restore the Degraded land at the UN ‘High-Level Dialogue on Desertification, Land degradation and Drought (DDLD)’. He is the president of the 14th Session of the Conference of Parties of United Nations Convention to Combat Desertification (UNCCD).

Key Points from the Address

i.In the last decade alone around 3 million hectares of forest cover were added in India. This has increased the combined forest cover to almost one-fourth of India’s total area.

ii.Centre of Excellence to be set up in India to promote a scientific approach towards land degradation issues.

iii.PM highlighted the initiatives taken by India to deal with the land degradation issue.

Globally, one fifth of Earth’s land area – more than 2 billion hectares is degraded, including more than half of all agricultural land. Land degradation affects 3.2 billion people across the world.