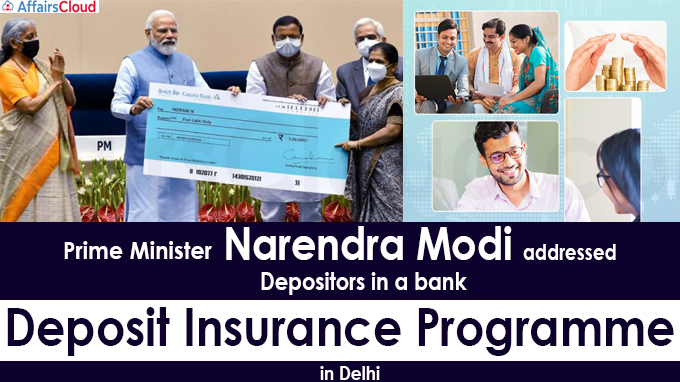 i.Earlier the depositors were provided with a provision to get only the amount up to Rs 50,000 out of the amount deposited in the bank (after Liquidation of the bank).

ii.Later the amount was raised to Rs 1 lakh and there was no time limit on when the money would be repaid to the customers.

iii.In July 2021, through the amendment to the Deposit Insurance and Credit Guarantee Corporation (DICGC) Act, 1961 the government has increased the amount that could be accessed by account holders from Rs 1 lakh to Rs 5 lakh and the time limit of 90 days i.e. 3 months was fixed to refund funds by a bank which is coming under Moratorium imposed by Reserve Bank of India (RBI).

i.After the hike of the refundable deposit amount to Rs 5 lakh, the number of fully protected accounts at the end of FY21 was constituted 98.1 percent of the total number of accounts, as against the international benchmark of 80 percent.

ii.Recently, the DICGC released the first tranche of interim payments, against claims received from depositors of 16 Urban Cooperative Banks which are under restrictions by RBI.

iii.Payout of over Rs 1300 crore has been made to alternate bank accounts of over 1 lakh depositors against their claims.

iv.Union Minister of Parliamentary Affairs, Pralhad Joshi,  has stated that about a total of 77,819 depositors of 3 inactive urban cooperative banks (UCBs) will be paid deposit insurance up to Rs 5 lakh under the newly expanded scheme of the Deposit Insurance and Credit Guarantee Corporation

In November 2021, the Union Cabinet approved restoration and continuation of the Member of Parliament Local Area Development Scheme (MPLADS) during the remaining part of Financial Year 2021-22 and up to Financial Year, 2025-26 co-terminus with the period of 15th Finance Commission which was suspended in April 2020 due to COVID-19.