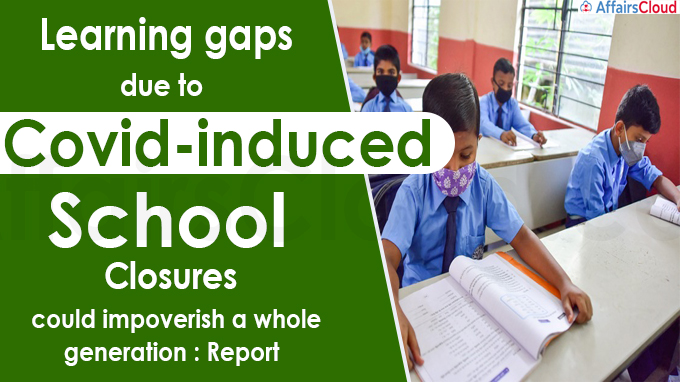 As per the report of the World Bank (WB), titled, ‘The State of the Global Education Crisis: A Path to Recovery’, the present generation of students risks losing USD 17 trillion (higher than the 2020 estimation of USD 10 trillion) in lifetime earnings in present value, or about 14 percent of today’s global GDP (Gross Domestic Product) due to COVID-19-related school closures.

i.COVID-19 has brought education systems across the world to a halt, with school closures affecting more than 1.6 billion learners.

ii.The increase of learning poverty might have a greater impact on future productivity, earnings, and wellbeing for this generation of children and youth, their families and the world’s economies.

iii.More than 370 million children globally missed out on school meals during school closures, losing what is for some children the only reliable source of food and daily nutrition.

iv.Primary and secondary students in Sao Paulo (Brazil) learned only 28 percent of what they would have in face-to-face classes and the risk of dropout increased more than threefold.

v.In rural Karnataka, the share of grade 3 children in government schools able to perform simple subtraction fell from 24 percent in 2018 to only 16 percent in 2020.

vi.More than 200 million learners live in low and lower-middle income countries that are unprepared to deploy remote learning during emergency school closures.

vii.To date, less than 3 percent of governments’ stimulus packages have been allocated to education; in low- and lower-middle-income countries, the share is less than 1 percent.

The World Bank released the updated Groundswell report “Groundswell Part 2: Acting on Internal Climate Migration” on 13th September 2021. According to the report, Climate Change could force more than 216 million people from across 6 regions to migrate from their own countries by 2050.