On December 9, 2019 the parliament has passed the “The Recycling of Ships Bill 2019’’ inorder to ensure environmentally safe and sound recycling of Ships in India. Under the bill, the govt. will provide regulations of recycling of ships by setting international standards. The bill feature in detail are as follows: 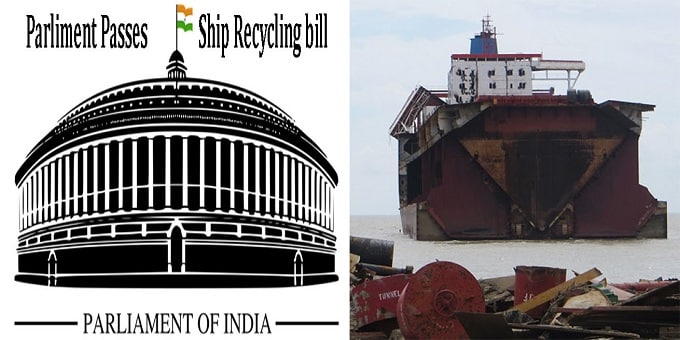 i.The already existing Shipbreaking Code (revised),2013 and the provisions of the Hong Kong Convention, 2009 will be dovetailed (joined together) in this bill.

ii.The bill is expected to bring reaching effects in Indian Ship Recycling industry. It would ensure environment friendly recycling process of ships and adequate safety of the workers in the shipyard. The bill is mainly focused with the workers’ safety concerns.

vii.Hong-Kong Convention(HKC): The HKC is aimed at ensuring that ships, when being recycled after reaching the end of their operational lives, do not pose any unnecessary risks to human health, safety and the environment.