The Sumitra Charat Ram Award, is given to those individuals who have shown greater contribution in the field of Indian Classical Dance and Music or other disciplines of Indian Art and Culture including theatre during the last 15 years and who had a significant impact in promoting a particular art form.The prize is named after Sumitra Charat Ram.

Shriram Bharatiya Kala Kendra, founded in the year 1952, is an Indian cultural institution which is one of the country’s premier institutions for music, dance and performing arts in New Delhi.

Chaurasia was born on July 1, 1938 in Allahabad to a wrestler father.He started learning vocal music from his neighbour, Pandit Rajaram, at the age of 15 and later took up the flute under the mentorship of Bholanath Prasanna of Varanasi for the next eight years. 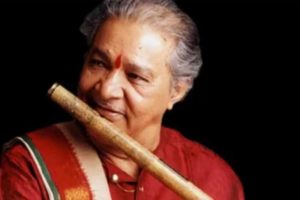