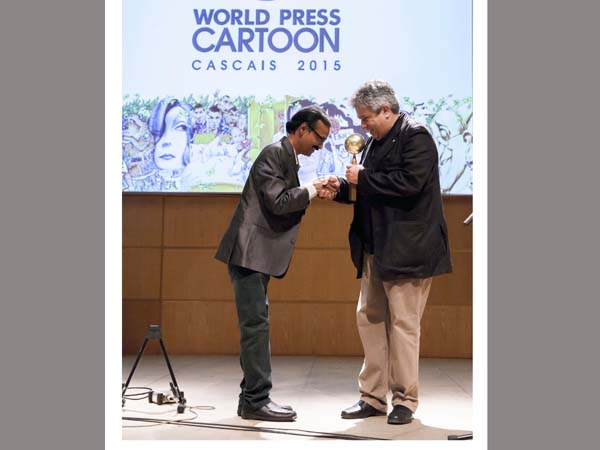 The mission of the World Press Cartoon is to distinguish, exhibit, promote and award the best drawing published in the world press, which did not get compromised in the background of dwindling sponsor support because of the Euro Zone Crisis.

The WPC opines that Caricatures, Editorial and Gag cartoons that will make a retrospective view of the world’s current affairs in a calendar year, views from different cultures, drawings where the cartoonists picture and criticize the ways of the world with humour and a sharp eye. The WPC aims at gathering the best in the international production of humour drawings published in the Press every year and feels that a universal salon demands a universal participation.

The Grand Prix Award has had the reputation, as a Nobel Prize equivalence, in the world of cartoons.  Basically, it was not a thematic event, but selected amongst the published and printed cartoons of the preceding year.  Along with the Grand Prix Award, awards for best cartoons in the categories of Editorial, Caricature and Gag were also presented with a total cash award of € 28,000 (approximately 20 lakhs INR).

Shri Pamarthy Shankar is concerned, he hails from Nagireddypalli in Nalgonda District of Telangana State.  He is an expert cartoonist in the category of caricatures, one amongst them, a caricature on Nelson Mandela, published in a Telugu Daily, Sakshi (06 December 2013), bagged him the Grand Prix Cartoon Award 2014.  The drawings of Shankar did bag prizes of National and International sigficance amongst which, Brazil International cartoon and caricature contest’s first prize in 2008 and Maya Kamath Memorial Award for Excellence in Cartooning of 2008 and Best Political Cartoonist Award 2007 from the Government of Andhra Pradesh.