On April 29, 2020, Famous Bollywood star Sahabzade Irrfan Ali Khan, whose international movie career included hits such as Slumdog Millionaire, Life of Pi and the Amazing Spider-man etc., passed away at the age of 53 due to colon infection in Mumbai, Maharashtra. He had been battling neuroendocrine cancer since 2018. He was born on January 7, 1967, in Jaipur, Rajasthan. 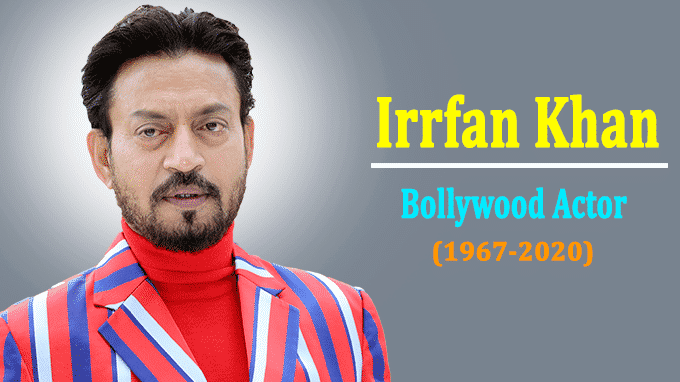 i.About Irrfan Khan: Irrfan earned a scholarship to study at National School of Drama (NSD) while pursuing his MA (Master of Arts) degree. After NSD, Irrfan moved to Mumbai to pursue his passion and went on to appear in a slew of well-known shows at the time like Chanakya, Bharat Ek Khoj, Banegi Apni Baat, Chandrakanta etc.

ii.Irrfan made his screen debut in the 1988 Mira Nair directorial Salaam Bombay. After struggling for many years, success finally came to him after he starred in Asif Kapadia’s The Warrior (2001).

iii.The actor went on to star in several acclaimed films such as Haasil, Maqbool, Life in a Metro, Paan Singh Tomar, The Lunchbox, Haider, Piku and Talvar. He has acted in over 50 Indian films.

iv.Irrfan was also known for his work in international projects like The Namesake, The Darjeeling Limited and Jurassic World among more. Khan was last seen in Bollywood comedy film, Angrezi medium, which was released in March 2020.

v.Awards: Irrfan Khan was honoured with Padma Shri by the Government of India (GOI) for his significant contribution to arts and cinema. He also won the National Film Award and 4 Filmfare awards.

vii.He also collaborated with Oscar-winning directors such as Danny Boyle, Ang Lee and appeared in the HBO (Home Box Office) show In Treatment.