On 11th March 2019, Vice President of India, M Venkaiah Naidu is on a 2 Nation visit to Paraguay and Costa Rica. He was accompanied by a high-level delegation including the Minister of State for Tourism K J Alphons, the Members of Parliament and Senior Officials. 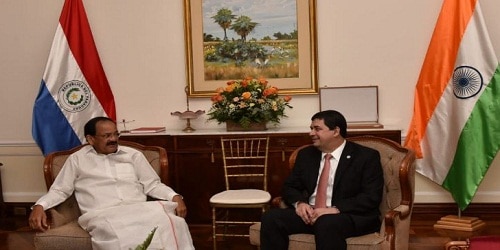 Vice President made a key note address at India-Paraguay Business Forum
Venkaiah Naidu attended India-Paraguay Business Forum which will form basis for economic growth by boosting business opportunities between the two countries.
The forum mainly aims to provide platforms for policy makers, think tanks, academics and business people to engage in a manner that will motivate fresh policy thinking and innovative solutions to the challenges faced in the region.

Other Highlights of the visit

Highlights of the visit