On February 4, 2020, United Nations Educational, Scientific and Cultural Organisation (UNESCO) Director-General Audrey Azoulay arrived in New Delhi, India on a three-day visit till Feb 6, 2020 to boost strategic partnership in the areas of heritage, education and artificial intelligence. India is one of UNESCO’s founding members.  This was her first official visit to India after appointed as the DG of UNESCO. She began her trip with a visit to the Raj Ghat to pay her respects to Mahatma Gandhi who has had a profound influence on UNESCO. She met Prime Minister Shri Narendra Modi and Union MoS Culture and Tourism (Independent Charge) Prahlad Singh Patel, in New Delhi during her visit. 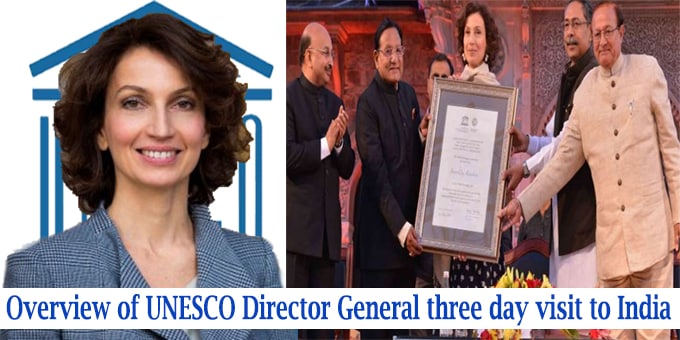 She has commended India for Promoting Education of Girls about the various schemes like NISHTHA, LEAP, ODB- Smart Classroom, DHRUV, SWAYAM MOOCS (Massive Open Online Courses) Portal  that India has taken up.