PM Modi arrived in Bishkek for SCO summit 2019
On June 13, 2019, Prime Minister Narendra Modi arrived at Bishkek, Kyrgyzstan for the Shanghai Cooperation Organisation (SCO) summit 2019. It was the first multilateral engagement after his re-election. He discussed the global security situation, multilateral economic cooperation, people-to-people exchanges and topical issues of international and regional importance. The SCO Summit was followed by the bilateral component on the visit to the Kyrgyz Republic. 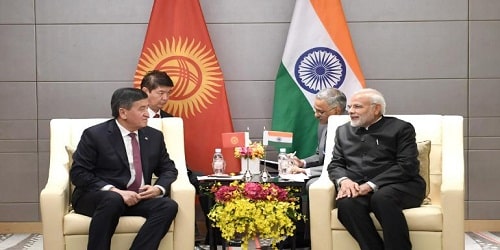 Prime Minister Modi, Kyrgyzstan President Jeenbekov jointly inaugurated India-Kyrgyz Business Forum
On June 14, 2019, Prime Minister Narendra Modi held bilateral meetings with the President of Kyrgyzstan Sooronbey Jeenbekov. They jointly inaugurated India-Kyrgyz  Business forum and asked their business communities to explore the untapped potential for deepening bilateral relations between the two countries.
Key Points:
i. Both countries gave a final nod to the Double Taxation Avoidance Agreement (DTAA) and the bilateral investment treaty. It will help in creating a proper atmosphere for the bilateral trade.
ii. The three catalysts for the growth of bilateral trade and investment opportunities are proper atmosphere, connectivity and business-to-business exchanges.

India and Uzbekistan explored joint economic projects ahead of SCO Summit
Uzbekistan, Central Asian State besides Kazakhstan, visited Gujarat on June 13-14, 2019 and a delegation from Gujarat visited Uzbekistan’s Andijan region which is being developed as a business hub, on June 10, 2019. It consisted of the officials of the Ministry of Tourism of Gujarat, Federation of Indian Chambers of Commerce and Industry (FICCI), Industries Commissionerate, representatives of pharmaceutical, energy, innovation industries, as well as start-up companies to study the areas for developing mutually beneficial cooperation. Andijan region and Gujarat State are partner regions. The Partnership Agreement between them was signed in October 2018. The purpose of the visit of the Indian delegation was to further expand cooperation between Andijan and Gujarat.

Meeting with Russian President Vladimir Putin
PM Modi held a meeting with Russian President Vladimir Putin and they reviewed all aspects of bilateral relations to further boost the strategic relationship between India and Russia. Various subjects pertaining to India-Russia relations were discussed and the key focus was given to defence and energy. They also reviewed trade and investment ties. Modi thanked the Russian President for his support for the AK-203 Kalashnikov rifles manufacturing unit in Amethi, Uttar Pradesh which is a joint venture between India and Russia.