Prime Minister of India, Shri Narendra Modi was on a 3 nation visit to France, United Arab Emirates (UAE) and Bahrain from 22-26 August 2019. He also attended the 45th G7 Summit for the year 2019 in Biarritz, France. 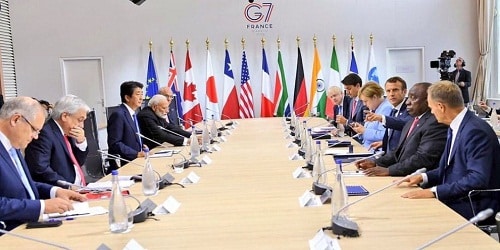 Visit to France (August 22-23, 2019)
The Prime Minister of India, Mr Narendra Modi, visited France for an official visit at the invitation of the President of the French Republic, Mr Emmanuel Macron, for a Bilateral Summit in Paris. He arrived in France on the first leg of his three-nation tour. He was received by the Minister for Europe and Foreign Affairs Jean-Yves Le Drian at the Charles de Gaulle Airport in Paris.

MoUs signed
The Memorandum of Understanding (MoU) signed by India with France are as follows:

India, France express commitment to Freedom Of Navigation in Indo-Pacific

Address to Indian Community in Paris

UAE can be a valuable partner in realizing India’s five trillion dollar economy: PM
PM Modi claimed that the UAE can help India in achieving its ambitious dream of achieving a $5 trillion economy by 2024-25.

UAE honours PM Narendra Modi with highest civilian award ‘Order Of Zayed
PM Modi was conferred with the highest civilian award of the United Arab Emirates, the “Order of Zayed” as a mark of appreciation for his efforts to boost bilateral ties between the two nations. The award, which is named after Sheikh Zayed bin Sultan Al Nahyan, the founding father of the UAE, acquires special significance as it is being awarded to Modi in the birth centenary year of Sheikh Zayed.

4 MoUs signed
The two countries signed a string of Memorandum of Understanding (MoU) in the fields of culture, space, solar energy and RuPay card. This was disclosed by Secretary (Economic Relations in External Affairs Ministry) TS Tirumurti.

PM Modi launches $4.2 mn redevelopment project of Hindu temple in Bahrain
PM launched the $4.2 million redevelopment project of the 200-year-old Lord Sri Krishna temple in Manama. He offered prayers at the temple and also the ‘prasad’ that he bought with the RuPay card after launching it in the UAE. This is among the oldest temples in the region and manifests the strong ties between India and Bahrain.

$22 million to tackle Amazon wildfires
World leaders at the G7 summit in France pledged to spend a total amount of $22 million to fight the raging wildfires in the Amazon in South America that are threatening the world’s biggest rainforest.

G7 might consider reinstating Russia
US President Donald Trump pressed the G7 group to reinstate Russia as a permanent member of the grouping. But no consensus was reached on whether or not to invite Russia to the next year’s G7 summit in the United States.

G7 leaders support Hong Kong’s autonomy
The G7 leaders confirmed the existence and importance of the Sino-British Joint Declaration of 1984 on Hong Kong and called for violence to be avoided.

Meeting on the Sidelines of G7 Summit