On 3rd February 2019, Prime Minister Shri Narendra Modi visited Jammu and Kashmir where he inaugurated various developmental projects in the area of health, education and infrastructure. The details of his visit are as follows:

P.M Narendra Modi’s Visit to Leh
Prime Minister Shri Narendra Modi visited Leh in Ladakh in the first leg of his one day visit to Jammu and Kashmir and inaugurated multiple projects. 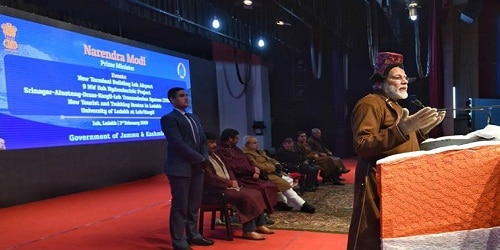 PM Modi inaugurates first-ever university in Ladakh
PM Shri Narendra Modi launched the University of Ladakh which is the first-ever cluster university in the Ladakh region of Jammu and Kashmir. The university will have administrative offices in Leh and Kargil.
Key Points: