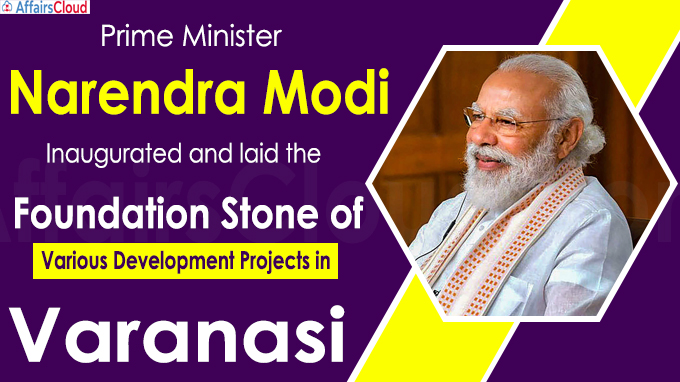 Prime Minister (PM) Narendra Modi paid a one-day visit to his constituency Varanasi in Uttar Pradesh. During the visit, he inaugurated and laid the foundation stone for multiple development projects worth INR 1500 crores.

i.The City of Varanasi is set to become a medical hub of Purvanchal region.

iii.CIPET for which foundation stone was laid will help in industrial development of the city.

‘Rudraksh’ – an International Cooperation & Convention Center built at a cost ~ INR 200 crore was inaugurated by PM.

i.The Centre will make Varanasi an attractive destination for conferences, and will draw more tourists and businesspersons to Varanasi.

ii.It aims to provide opportunities for social and cultural interactions between people at the International Convention Centre.

iii.The centre has built in an environment friendly way and fits for Level 3 of

The ‘National Mission on Pilgrimage Rejuvenation And Spiritual Heritage Augmentation Drive’ (PRASHAD) is a Central Sector Scheme launched by the Ministry of Tourism in 2014-15.

i.The project ‘Development of Varanasi under PRASHAD Scheme – Phase II’ was approved by the Ministry of Tourism with the cost of INR 44.69 crores in February 2018.

ii.The project ‘Development of River Cruise in Varanasi under PRASHAD Scheme’ was approved by the Ministry of Tourism with the cost of INR 10.72 crore in February 2018.