President of the Republic of Mongolia His Excellency Mr. Khaltmaagiin Battulga paid a visit to India from 19-23 September 2019. He was received by Union Sports minister Kiren Rijiju and was given a ceremonial reception at Rashtrapati Bhavan in Delhi on his arrival. It is the first state visit by a Mongolian president in the last 10 years.

The details of the visit are as follows: 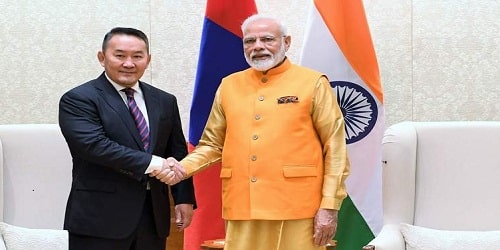 Important MoUs signed:
The two nations signed 4 Memoranda of Understandings(MoU). They are

India-Mongolia Business Forum held in New Delhi:
FICCI organized “Joint Business Meeting in honour Mr Khaltmaagiin Battulga, President of Mongolia” with other industry chambers in New Delhi. The meet was addressed by Mr Dharmendra Pradhan, Minister for Petroleum & Natural Gas and Steel, Government of India. During the business forum two MoUs were signed which are as follows:

Important events during the visit:

Armed forces in exercises between India and Mongolia:
“Nomadic Elephant” in India and “Khaan Quest” in Mongolia