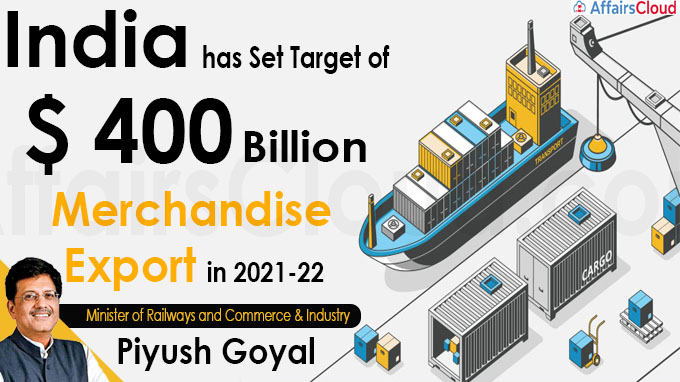 Union Minister for Commerce & Industry Piyush Goyal stated the achievements of the Ministry of Commerce and Industry in Q1 (April – June) of 2021-22.

Despite the pandemic, almost 97% of 2019-20 service export levels were achieved in the last FY.

Highest Ever Merchandise Exports during Q1 of 2021-22

Several Labour-Intensive sectors registered a rapid export growth during Q1 of 2021-22. The exports in the engineering goods sector increased by USD 5.2 billion over Q1 of 2019-20.

The number of startups recognised by DPIIT (Department for Promotion of Industry and Internal Trade), Ministry of Commerce & Industry has crossed 50,000 and is spread across 623 districts in India.

To improve the ease of doing business and reduce the compliance burden 6,426 compliances have been reduced in Phase-I. In Phase II – 3,177 compliances were reduced.

January 18, 2021, Union Ministry of Commerce & Industry has stated that the ‘New Foreign Trade Policy 2021-26’ of India will come into effect from April 1, 2021. The main mission of the policy would be to make India a leader in International Trade in the next 5 years.

About Ministry of Commerce & Industry