India vs South Africa Test Series was held in India in which India won the 3 match series by 3-0. It was the first time that India whitewashed South Africa in the history of Test cricket. The South Africa cricket team toured India from September 15, 2019, to play 3 test matches and 3 Twenty 20 International series (match drawn). 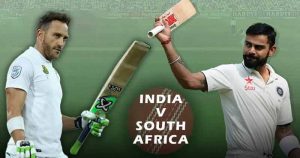 Key Points:
i.The Test series formed part of the 1st Edition of 2019–21 International Cricket Council (ICC) World Test Championships of Test cricket.
ii.The captain of the Indian team was Virat Kohli and of the South African team was Faf du Plessis.
iii. Rohit Sharma of India was named as the Player of the series.
iv.Through the win against South Africa, India is on top position in the ICC World Test Championship table gaining a maximum of 120 points with each Test worth 40 points. The top two teams at the end of the league will play the final in the United Kingdom in June 2021 with the winners crowned as the World Test Champions.