On September 23, 2019 the Fédération Internationale de Football Association (FIFA) which is called as International Federation of Association Football in English conducted the FIFA Football Awards 2019 held in Teatroalla Scala in Milan, Italy. The awards are briefed below. It was the 4th edition after the award’s revival (the award was earlier given under the name FIFA World Player of the Year which merged with France Football’s Ballon d’Or in 2010 to become the FIFA Ballon d’Or in a six-year partnership).  The first awarding ceremony held in 2016. 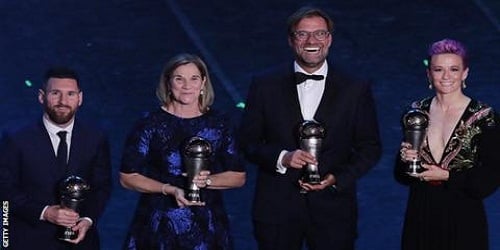 Lionel Messi wins Best Men’s Player of the Year for the first time
Argentinian football player Lionel Andrés Messi Cuccittini, commonly known as Lionel Messi won 2019 Best FIFA Men’s Player of the Year award for the first time after the award’s revival. He also recently won the European Golden Shoe for the sixth time after scoring 36 league goals in 2018/19. It is the sixth time Messi has been voted the world’s best, after wins in 2009, 2010, 2011, 2012 and 2015.

Other awards:
Award for coach:

FIFA Puskás Award: Hungarian footballer Daniel Zsori won the 2019 FIFA Puskás Award. The award is given to players irrespective of the gender for having scored the most beautiful goal of the calendar year.

FIFA fan award: The 2019 FIFA fan award was given to Silvia Grecco. Silvia was awarded for taking her blind son Nikolas to the stadium and explaining the match scenario thus developing a bond with the game.

About FIFA:
Founded- 21 May 1904.
Headquarters- Zürich, Switzerland.
Motto- For the Game. For the World.