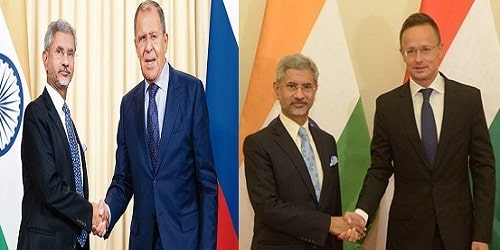 External Affairs Minister Jaishankar’s visit to Hungary(August 25-27,2019)
Arrival:
EAM Dr. S. Jaishankar arrived in Budapest airport on a 2 day- visit to Hungary, where he was received by Kumar Tuhin , Ambassador of India to the Republic of Hungary, and senior officials from the Hungarian side including Ms. Edina Pasztor, Chief of Protocol and Dr. Norbert Revai-Bere DG.

External Affairs Minister Jaishankar’s visit to Russia(August 27-28,2019):
EAM Dr. S. Jaishankar arrived in Moscow, Russia for a two-day visit from  August 27-28,2019. This was Jaishankar’s first visit to Russia since he assumed office on June 2019.
His visit comes days ahead of the 5th Annual Eastern Economic Forum as well as the 20th Annual Bilateral Summit between the two countries in Vladivostok, Russia from September 4 – 6,2019, where Prime Minister Modi will be the chief guest.

Jaishankar unveils Mahatma Gandhi’s Statue at Indian Embassy in Moscow
EAM  Jaishankar has unveiled a statue of Mahatma Gandhi at the premises of the Indian embassy in Moscow, Russia on the occasion of Gandhi’s 150th  birth anniversary.
i.Gandhi was inspired by Leo Tolstoy, Russian writer-philosopher. The two leaders never met personally in their life-line, but both shared a special bond and exchanged ideas through letters.