The defence minister of India, shri Rajnath Singh paid a 3-day visit to Tashkent, Uzbekistan from November 1-3, 2019 representing the country at the Shanghai Cooperation Organisation (SCO) heads of state meeting. This was the first visit by an Indian Defence Minister to Uzbekistan in about 15 years. The visit in detail are as follows, 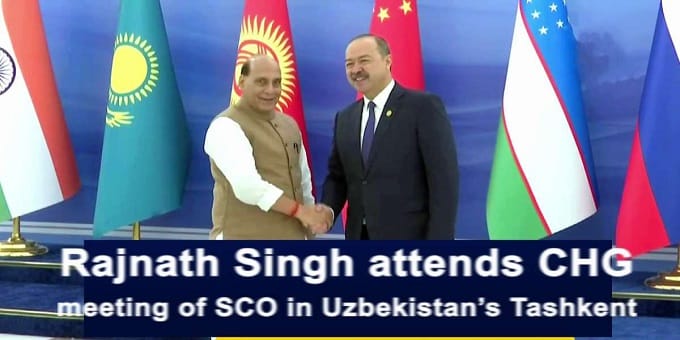 3 MoUs signed in the fields of Military Medicine and Military Education:
Rajnath Singh and his Uzbekistani counterpart Major General Bakhodir Nizamovich Kurbanov a total of 3 Memoranda of Understanding(MoU): 1 MoU in the field of military medicine and 2 Institution-to-Institution MoUs on military education. These 2 MoUs were part of the MoU on Military Education signed between the two countries in October 2018.

i.Assistance to the Uzbek army:

ii.Invite by India: The Uzbekistan army was invited for the Joint Exercises in 2020 in India.

iii.The two defence ministers also witnessed 1st ever exchange over a video-link between College of Defence Management in Secunderabad, Telangana and Armed Forces Academy of Uzbekistan in Tashkent.

18th CHG of SCO at Tashkent:
Defence Minister Rajnath Singh addressed the 18th meeting of the Council of Heads of Government (CHG) of SCO at Tashkent in Uzbekistan as special envoy (messenger or representative) of Prime Minister shri Narendra Modi. During his address, shri Rajnath singh invited all the SCO members to strengthen the existing laws and mechanisms to combat terrorism. The 19th meeting will be hosted by India in 2020.

Homage to former PM Lal Bahadur Shastri:
The Indian defence minister later paid homage to former Prime Minister of India Shri Lal Bahadur Shastri at his statue at Shastri street in Tashkent, Uzbekistan. Shastri spent his last days of life in Tashkent where he passed away on January 11, 1966, the next day after the Tashkent Agreement was signed between India and Pakistan post the 1965 Indo-Pakistani war.