On October 03-06, 2019 Bangladesh’s Prime Minister Sheikh Hasina paid a four-day official visit to India at the invitation of Prime Minister Narendra Modi. This is the first visit of Bangladesh PM since the completion of elections in both Bangladesh and India. 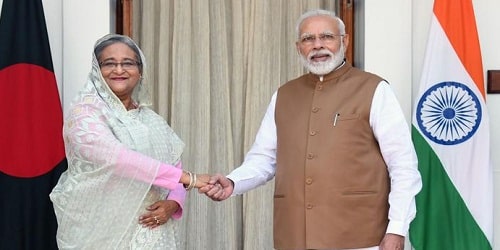 MoUs signed:
The following 7 Memorandum of Understandings(MoU) were signed between India and Bangladesh

Bilateral projects:
A total of 3 bilateral projects were inaugurated through video link. The three projects unveiled were in three separate but key areas like energy, skill development and people to people ties. They were

Meet with Indian PM: The Bangladesh PM met PM of India Shri Narendra Modi, and both the leaders discussed the issues of mutual interest. The issues of Teesta water sharing and Rohingya were also discussed.