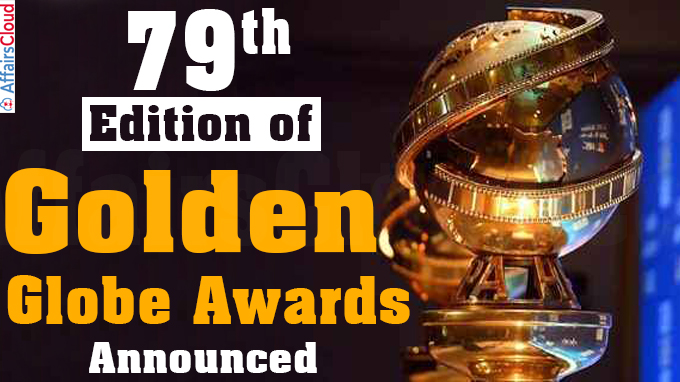 During the event, Kyle Bowser, Senior Vice President of the National Association for the Advancement of Colored People(NAACP) Hollywood Bureau, presented the “Reimagine Coalition,” a joint five-year initiative to increase diversity, equity, and inclusion across the global entertainment industry.

rapper Snoop Dogg and HFPA president Helen Hoehne have announced the nominations for the 2022 Golden Globe award on 13th December 2021.

ii.The Power of the Dog, West Side Story, and Succession has won three awards each.

iii.Actor Will Smith won the “Best Actor-Motion Picture Drama”, his first-ever Golden Globe, for his performance in “King Richard.”

iv.Nicole Kidman has won the Best Actress – Motion Picture Drama for her performance in ‘Being the Ricardo’. This is her 5th Golden Globe Award, previously she has won the golden globe in 1996(To Die For), 2002(Moulin Rouge!), 2003(The Hours), and 2018(Big Little Lies).

v.Ariana DeBose has won the Best Supporting Actress – Motion Picture for West Side Story (2021). She won the award for recreating the part of previous Golden Globe winner Rita Moreno who played Anita in West Side Story (1961).

vi.Oh Young-soo(O Yeong Su) (South Korea) has won the Best Supporting Actor – Television for Squid Game. He became the First South Korean actor and the first actor to ever win a Golden Globe in the TV category for a non-English language show.

Winners of the 2022 Golden Globe Awards: