The second informal summit between the Prime Minister(PM) of India Shri Narendra Modi and the President of the People’s Republic of China Mr Xi Jinping was held in Mahabalipuram,Tamil Nadu, on 11-12 October 2019. Previously, the first informal summit between the two nations was held in Wuhan, China in April 2018. Both leaders attended cultural programme at the shore temple in Mahabalipuram on the inaugural day of the meet.Some of the important events during the meet are as follows, 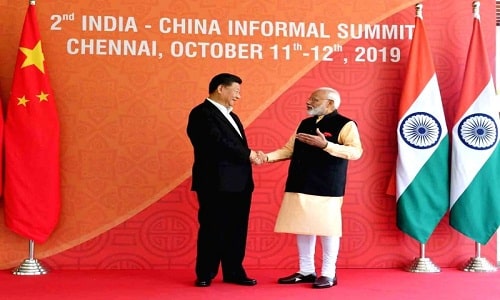 2020: Year of India-China Cultural and People to People Exchanges

India, China to set up a new mechanism for trade and investment related issues

In line with the ‘Wuhan Spirit’ (contribution for global peace development following 1st informal summit) and the ‘Chennai Connect”. They agreed to continue this practice in the future. Prime Minister Modi has accepted the invitation of President Xi to visit China for the 3rd Informal Summit.