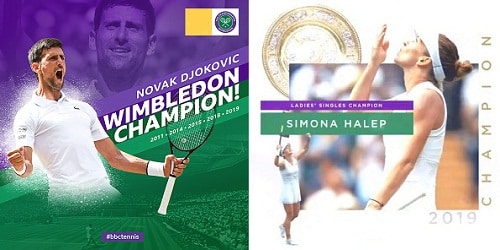 Venue:
The tournament took place at the All England Lawn Tennis and Croquet Club in Wimbledon, London, United Kingdom from 1st  July 2019 to 14 July 2019.
Winners:

About Wimbeldon
The Wimbeldon championship is commonly known simply as Wimbledon, is the oldest tennis tournament in the world. It was first held in 1877. It was played on indoor grass courts and was part of the ATP (Association of Tennis Professionals ) World Tour, the WTA(Women’s Tennis Association )Tour, the ITF (International Tennis Federation) Junior tour and the NEC Tour.