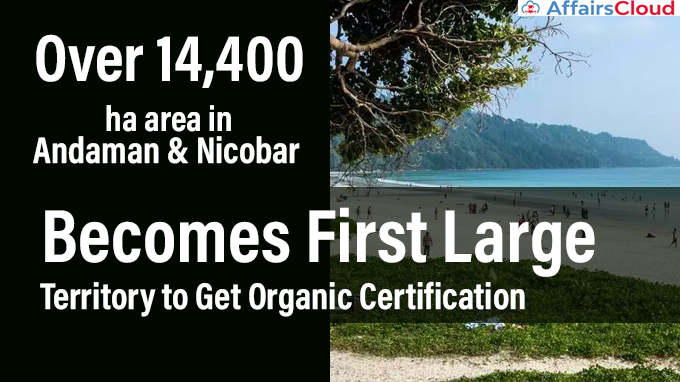 Ministry of Agriculture & Farmers Welfare (MoA&FW) has certified around 14, 491 Hectares of land in Car Nicobar and nancowry group of Islands in UT of A&N as ‘Organic Area’ under the ‘Large Area Certification (LAC)’ scheme of the PGS-India (Participatory Guarantee System) certification programme.

Ministry of Agriculture and Farmers Welfare has been promoting organic/natural farming through various schemes of Paramparagat Krishi Vikas Yojana (PKVY).

At present, India has more than 30 Lakh Hectare area registered under organic certification,

To the certified organic fold, the ministry has also launched an organic certification support scheme under PKVY (Paramparagat Krishi Vikas Yojana). Under the scheme, individual farmers can avail financial assistance for certification under any of the prevailing certification systems of NPOP (National programme for organic production) or PGS-India.

As per the international survey report (2021) India ranks at 5th place in terms of area and is at the top in terms of total number of producers (base year 2019).