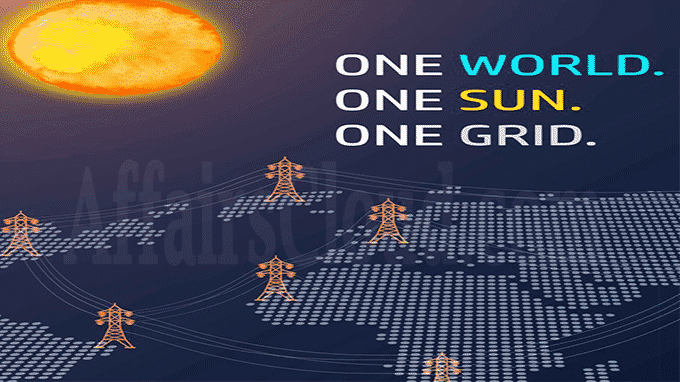 The Union Ministry of New and Renewable energy (MNRE) proposed the ‘One Sun One World One Grid’ (OSOWOG) to interconnect renewable energy by sharing solar resources with more than 140 countries of West Asia and SouthEast Asia. The grid will be interconnected with African power pools.

-For the implementation of proposed OSOWOG, the MNRE has invited proposals from consulting firms for making a long-term OSOWOG road map and identify two or three cross-border projects that can be initiated within one or two years.

-Preference should be given to one with each of the Middle East, South East and Africa regions considering India as the grid fulcrum for these identified pilots.

-India has already initiated the International Solar Alliance (ISA) which aims to deploy over 1,000 GW of solar generation capacity globally and mobilise investment of over $1 trillion towards by 2030.

–Electricity supply to neighboring countries: The government is also planning to connect more neighbouring countries through a regional power grid which can be used to supply electricity to surrounding nations without adequate number of power plants. Apart from Bhutan, Nepal, Myanmar and Bangladesh, which already take power from India, there are plans to connect Sri Lanka with power transmission lines as well.

* India, along with the other countries of the South Asian Association for Regional Cooperation, had signed an agreement to enable cross-border electricity trade on a voluntary basis among the member states in November 2014.

* MOU(a memorandum of understanding ) in August 2018 was signed for establishing grid interconnection between the members of the Bay of Bengal Initiative for Multi-Sectoral Technical and Economic Cooperation (Bimstec).