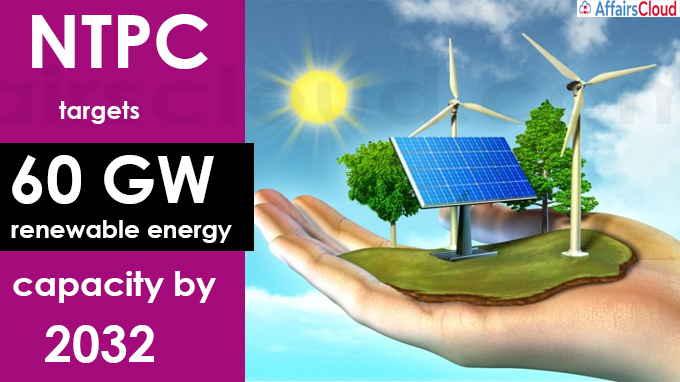 During the recently concluded Ministerial-level Thematic Forum for UN High level Dialogue on Energy 2021 (HLDE), India’s largest Power Producer NTPC Ltd unveiled its target to install 60 GW (or 60,000 MW) of renewable energy capacity (wind and solar) by 2032,as part of its plans to reduce 10% of its net energy intensity by 2032.  With this, NTPC Ltd became India’s 1st energy company to declare energy compact goals as part of HLDE 2021.

i.NTPC’s wholly owned subsidiary NTPC Renewable Energy had set a capacity target of 32 GW by 2032 (which constitutes 25% of its overall power generation capacity) when it was formed in 2020.

ii.At present, the installed renewable energy capacity of NTPC Ltd is 1,350 MW. It aims to add another 13,000 MW of green power generation by FY24.