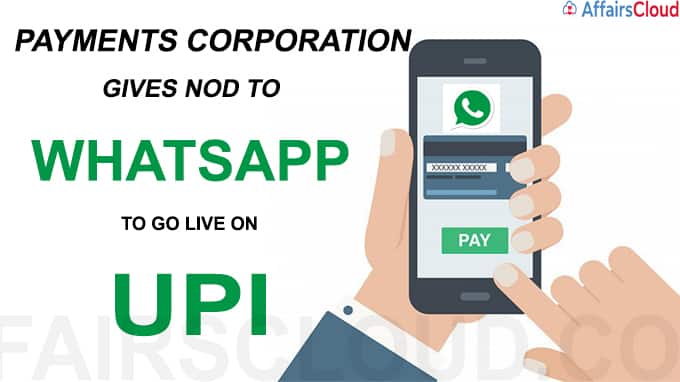 On November 5, 2020 The National Payments Corporation of India (NPCI)  gave approval for ‘WhatsApp Pay’, to operate its payment service  on Unified Payments Interface (UPI)  in India.

NPCI has capped of 30% on the total transaction volume on the UPI network of all Third Party App Providers (TPAPs). This will be effective from January 1, 2021.

i.In India, there are about 400 million WhatsApp users, and after this approval, Facebook-owned Whatsapp can expand its UPI base to a maximum of initial 20 million registered users.

iii.It is designed with strong security and privacy policies, including entering a unique UPI PIN for each security.

iv.No transaction charges via WhatsAppPay. It is supported by more than 140 banks.

i.WhatsApp has been running its UPI-based payment system, WhatsApp Pay in Beta mode since 2018, with 1 million users.In August 2020, NPCI conveyed to RBI that WhatsApp Pay has met all the data localisation rules.On this front, the NPCI gave a nod to Whatsapp Pay.

TPAPs transaction volume in UPI will be capped at 30%: NPCI

i.The decision behind the capping of 30% at TPAPs transaction volume in UPI is to address the risks and further protect the UPI ecosystem.

ii.The existing TPAPs, who exceed the specified cap, will get 2 years from January 2021, to comply with the same in a phased manner.

iii.30% cap will be calculated on the basis of the total volume of transactions processed in UPI during the preceding three months on a rolling basis.

i.As per the latest undisclosed statistics on Third-party apps share in UPI transactions, currently, the Walmart-owned PhonePe is the most used UPI app in India, having processed around 835 million transactions in October with around  40% market share.

Note-It is to be noted that both these applications had exceeded the 30% transaction share.

For the 1st time, UPI network, operated by NPCI has crossed the 2 billion monthly transactions in October 2020. With this it has established itself as the primary retail payment channel in India.

i.UPI is an instant real-time payment system. The interface is regulated by RBI.

iii.Based on UPI, BHIM (Bharat Interface for Money), a Indian mobile payment App developed by NPCI was introduced in 2016. It is named after B. R. Ambedkar, Indian scholar, jurist, economist, politician and social reformer.

Founded – 2008, an initiative of RBI and Indian Banks’ Association (IBA) under the provisions of the Payment and Settlement Systems Act, 2007.